Parents should not be so worried about how much time their children spend in front of screens, the Royal College of Paediatrics and Child Health says.

It says there’s not enough evidence to confirm that screen time is itself harmful to children’s health and more research needs to be carried out on the issue.

And it adds that it’s impossible to recommend age appropriate time limits for screen time for children.

The RCPCH’s main recommendation within its new guide is that families should negotiate screen time limits with their children based on the needs of an individual child and the ways in which screens are used.

Its report says it’s important children get plenty of sleep, exercise and time with family and friends, and not just spend time on devices, such as mobile phones, tablets, computers and watching television.

When screen time displaces these activities, the evidence suggests there is a risk to child wellbeing, the RCPCH adds.

It recommends children should not watch television or go online within an hour of bedtime.

Parents should also set a good example by controlling their own phone use in front of their children, the RCPCH says. 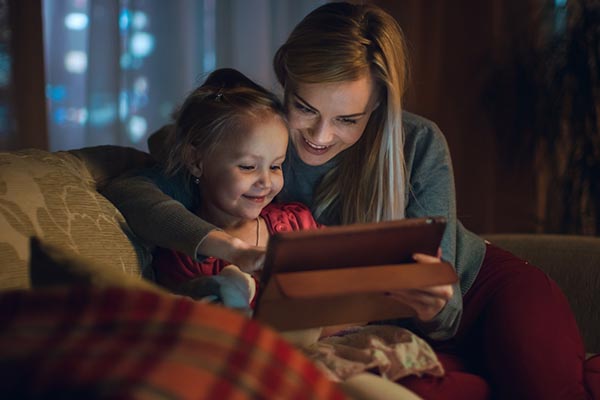 The RCPCH says its impossible to recommend age appropriate time limits for screen time for children.

“This new guide offers some clear and sensible advice on how to approach the issue and ways of balancing time on devices on mobile phones and tablets with the rest of family life.

“We know the solution will not be the same for every family, but we hope they will be able to use this to make informed decisions on how they want to approach their child’s use of mobile phones, tablets and other screens.

“These devices can offer valuable education, entertainment and communication opportunities, enabling children and young people to feel connected with the vast world around them and less isolated.

“At the same time, we need to understand more about the potential barriers and challenges that may prevent children and young people participating fully in family life, and the impact this may have on building resilience and achieving and maintaining positive mental health.”

Find out more about our work with children, young people and families.