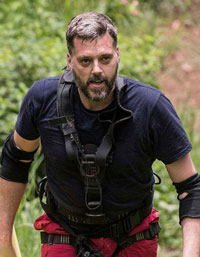 I'm an award winning radio host who most recently won Radio Moment of the Year at the 202 ARIAS. I'm 48, studying a diploma in counselling, have five cats and once stole some strawberries.

I've spent the last 22 years in a job I don’t think I like. Somehow, I ended up as a TV then radio presenter. This was not the plan. Once in, it was tricky to get out. There were some benefits. I was paid very well for my ritual humiliation on screen, and my radio work has helped me grow and develop as a human. In fact, I pride myself on being more open than any other broadcaster. I've talked openly about my suicidal thoughts, addictions, relapse and even came out as bisexual on air at the age of 46.

Perhaps I’ve been too open on the wireless. I haven’t had paid work in over a year and my willingness to share everything may be off putting for many radio bosses. Why do people seem scared of authenticity as opposed to what I perceive as blandness?

When I lost my job in June last year, I decided it was the perfect time to train for a new career. I had hosted a phone in show and encouraged people to call in and share how they were doing. Being late night, we had the space to talk in depth and some of the things that I heard showed me that there were a lot of lonely people out there. One night I had a call from a man who had taken an overdose and was dying. I had been toying with the idea of being a counsellor for a while, and suddenly I had the time on my hands to do it.

I’ve just completed my first year of a counselling diploma and my initial excitement has worn off somewhat, to the point where I’m not sure I actually want to do it as a job. But I have learnt that’s OK. It’s all part of the process. The last term has been tough – sexual abuse, addiction, loving the inner child – all things that have impacted on me throughout my 48 years. It’s likely I’m going to feel jaded, possibly even resentful. I shall carry on though.

My history has been starting things and then stopping, only to regret it later (I could almost read Japanese!). Recent diagnoses of ADHD and bi-polar explain a lot of my behaviour and attitude, and whether I go on to practice or not, it’s almost irrelevant. I’m already a different person from 12 months ago. I'm excited to meet the man at the end of the course.