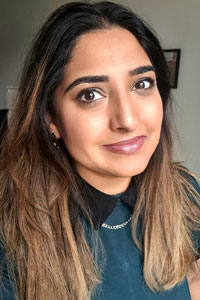 I'm a Senior Cognitive Behavioural Psychotherapist in perinatal mental health services in Birmingham. I have over 10 years of NHS mental health experience and gained my professional qualification in CBT at the University of Oxford. I work predominantly with parents to be, and parents who're struggling with mental health difficulties. I'm also training in video interaction guidance, an evidence based intervention to improve attachment and bonding as well as training in couples therapy. I've got an interest in the relationship between intersections and mental health, particularly race and gender. I speak at events and write about these themes through a South Asian lens.

On 16 November 2021, the cricketer Azeem Rafiq gave evidence of his experience of institutional racism at Yorkshire County Cricket Club (YCCC) to MPs in a Digital, Culture, Media and Sport Committee. Azeem spoke in detail about his treatment, and the treatment of others who share a similar ethnic background, by the YCCC. In a 57 page witness statement, Azeem relayed to the world incidents of direct and indirect racism and the impact it had on him and his family.

Azeem has been playing cricket professionally since 2007, selected for YCCC at the age of 12, so one can only imagine how these incidents formed his identity. Azeem said language used to describe him and his Asian colleagues ranged from "you lot" and "smelly Pakis" to being forced to sit separately from the other White players, given English names like Kevin to accusations of faking injuries and being called lazy and ungrateful for being absent from matches due to personal circumstances. He described compassion offered to White colleagues in times of personal hardship, and Pakistani counterparts being branded as difficult if they requested time off and support for reasons such as bereavement, and in Azeem’s case the death of his son. When these incidents were reported, the club excused the behaviour of key players and failed to support Azeem. After giving his best performances in 2016 and 2017 Azeem was released from YCCC and cricket, severely impacting his mental health.

The public conversation that ensued as a result of this hearing was felt massively by people of colour. Fourteen cricket players from minority ethnic populations (including Black and Asian players) have since reported experiencing and witnessing racism, and the Digital, Culture, Media and Sport Committee has recommended that the England Cricket Board have public funds withheld from them unless they show progress in tackling racism within the sport.

The effects were felt in therapy rooms, where the personal experiences of racial trauma had been triggered. Clients resonated and reported discomfort, sadness and anger at what Azeem had experienced. They had empathy for a man who felt that his race was a huge factor in mistreatment by people in power, a man who simply wanted to make the best of a fantastic opportunity given to him but was thwarted by men he'd seen as role models. Colleagues reported that they heard of the client’s own harrowing accounts of racism in their workplace or in their personal lives, as clients discovered a new language for experiences that they had held inside. Experiences they were told were a norm and encouraged not to make a further fuss about. Other therapists recounted clients speaking of their dismay in learning that a man who they thought had made it, a role model in popular media, was a victim of racism just like them.

As a therapist from an Asian background, I found it difficult to separate my own experience from others. Essentially I didn’t need to. While this is a collective experience, it's undergone alone, often without the knowledge that others feel it as we do. The cure to this collective trauma, in my experience, is compassion: learning to be present with our emotions and the emotions of our clients, and leaning into our humanity and vulnerability. There's also a need to be compassionate to ourselves when these feelings arise. We can then provide empathy and support from a genuine place, one congruent with our values. Clinical and peer supervision are powerful spaces to share these themes and cases, allowing the lone experience to become collective again, only this time with a different power dynamic.

Azeem’s bravery cannot go dismissed in the therapy room. His experiences gave voice to hundreds and thousands of others whose experience may be similar. Many would not have even known that what they're experiencing is wrong and unlawful, that the term is institutional racism and that they can challenge actions made against them by people in power. Our role as therapists can be to allow them to build that voice which brings the confidence to stand proudly in the skin they were born in.