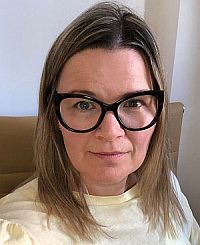 Yet these were some of the powerful comments articulated by presenters at an event which launched the publication of Men’s Accounts of Boarding School: sent away, which I attended (virtually) in 2021. I was so moved by the men’s stories that I felt compelled to contact the Chair of the event, Thurstine Basset, to discuss how this journal could give voice to their experiences. The result is a four-part series, written by ex-boarders, both men and women, many of whom work in mental health and support services with children, young people and adults. The first piece, Sent away, co-written by Thurstine and Gordon Knott, sets the scene on surviving boarding school, and the others will follow in June, September and December. The series makes for commanding reading, whether you’re boarding school experienced or not.

An equally emotive, and perhaps more widely relatable, read is Am I good enough?, March’s featured article, in which Michelle Higgins reflects on her (occasional) sense of imposter syndrome in the context of a working-class childhood. Like Michelle, I grew up in the north of England, in ‘Thatcher’s Britain’ of the 1980s. The narrative then was of a powerful, educated, privileged ‘them’ and a powerless, financially and educationally deprived ‘us’. Many of ‘us’ will recognise Michelle’s feelings of fraudulence and the fear of being exposed as an imposter. I commend her for her honesty and courage in sharing her experiences, which I hope will resonate and encourage others to do the same.

In the previous issue, I published a letter from Kate Rufus (BACP CYPF, December 2021), prompted by an article in this journal, in which she highlighted the importance of the language used to describe self-harm. She urged us to drop the ‘deliberate’, and I was so struck by her passion that I asked her to contribute an article. The result is Attention, please, in which Kate cautions against describing self-injury as attention seeking, asserting that this illustrates a lack of understanding rather than a realistic interpretation of the drive to self-injure. I’m fascinated by language, in my roles as a psychotherapist, writer and editor. I’m intrigued by the conscious or unconscious motivation to choose one word over another, to say something and not say something else, by slips of the tongue (or typos). Sometimes, my roles merge, for example when I write about psychotherapy and am obliged to edit my thoughts and transform fact into fiction. Yes, you read that correctly; that’s how I manage the conundrum of writing about my therapeutic work without breaching confidentiality, which I’ve addressed in I once worked with a girl who…. I urge you to take heed if you’re thinking of writing for publication, whether for this journal or any other.

As I begin my third year as editor of this journal, I continue to be delighted by and grateful for submissions from such a diverse range of contributors, many of whom are writing for publication for the first time. In this issue, we welcome new, regular columnist Elizabeth Holt, who begins with Supervision for all. I perceive the role of editor as similar to that of clinical supervisor. In both, I guide and cajole, and offer insight, awareness and experience. Many new contributors tell me they are not academic or educated enough, or can’t write well enough, or don’t have enough experience, and it’s a privilege to accompany them to a place where they do feel good enough. Which brings me back to the title of the featured article, ‘Are you good enough?’ And the answer is, ‘Yes, you probably are’. Am I good enough? Natasha Page explains what led to the creation of her counselling mood cards. BACP Children, Young People and Families, March 2022 I once worked with a girl who...

Jeanine Connor addresses the conundrum of how to write about therapeutic work for publication, without breaching confidentiality. BACP Children, Young People and Families, March 2022 Gordon Knott and Thurstine Basset attended boarding schools before embarking on careers in mental health. In the first of a four-part series, they set the scene around surviving boarding school. BACP Children, Young People and Families, March 2022 Age in the therapy room

Leading the way
Divisional news, including updates from from BACP’s CYPF Lead Jo Holmes and Chairs In conversation with Thurstine Basset and Gordon Knott

Student and supervisor: a tutor’s view

"Hate functioned as a sticky psychological ‘glue’, which kept us together"

"[Supervision] ...is something that would surely enhance the wellbeing and environment of everyone working with CYP in educational environments" 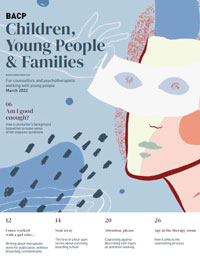