Leadership in uncertain times
How are leaders of therapy businesses negotiating their way through challenging times? Vicki Palmer offers her experience

Notes from the chair

Q&A
How do I work with multiple presenting issues in short-term work?

Practitioner matters
Patrick Quinn – How do we teach self-care? 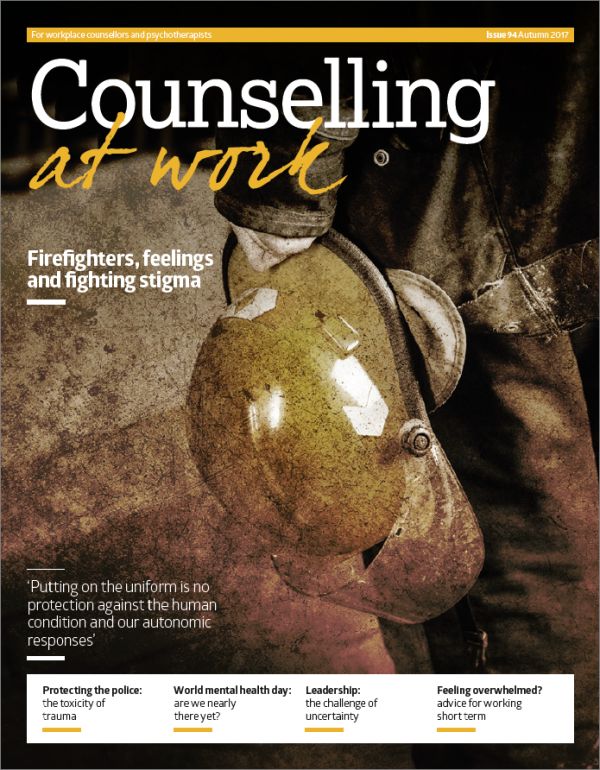 Therapy is not always about two people in a room. Our work with employees and their employers, is rewiring how we think about what it means to be human at work. Putting on the uniform is no protection against the human condition and our autonomic responses. The stigma surrounding mental health that has defined so much of my working life, is breaking down, and our profession is pivotal to this.

In the aftermath of the Grenfell Tower fire, Sean Starbuck, mental health lead for the Fire Brigades Union, said: ‘The stigma attached to mental health needs to be consigned to the bins of history where it belongs. It’s not going to get there on its own.’ Lisa Jenner and a team of counsellors working with Gloucestershire Fire and Rescue Service (GFRS) are a part of this shift, explored in our lead article.

Firefighters have seen it all – and more – yet as a profession, they struggle with the concept that they could be vulnerable to poor mental health. Despite this, the number of UK fire and rescue staff taking long-term sick leave due to mental illness has risen by nearly a third over the last six years, figures show.1

Education is essential to challenge the culture and it needs therapists with both the knowledge and confidence to deliver the message. It has far-reaching consequences, explains Lisa: ‘GFRS has moved from a strategy of responding to one of prevention and there is a real opportunity for us as counsellors to now do the same. There are 63 per cent fewer fires than 10 years ago and 53 per cent fewer road traffic collisions. Imagine if we could achieve the same statistics in the mental health arena.’

The horrific cycle of terror atrocities means that the work of the police is never far from our awareness these days. What they witness and the psychological and emotional demands of their duties means that psychological screening is one way to help protect them from the occupational hazard of exposure to trauma and poor mental health. Noreen Tehrani has worked with the police for over 25 years and dedicates her article to them.

A key message to management and leaders is that, despite the horrors that those on the front line witness, it’s too often organisational issues, poorly managed changes, or miscommunications that end up being the tipping point. This creates a different kind of carnage, resulting in sickness absence, presenteeism, loss of staff, and recruitment costs. We need more managers and leaders to understand how people tick, to minimise the harm and damage done at an individual, economic and societal level.

What makes a good leader is at the forefront of British politics as I write, and always during times of uncertainty and change. With so much of both in the lives of our clients, and in society, Vicki Palmer reflects on the fifth anniversary of her therapy business and her guiding principles for decision-making. Bringing much from her therapeutic person-centred approach to the running of her business, Vicki offers some advice for the entrepreneurs out there.

A growth area in our sector is the need to prepare for critical incidents, as practitioners are increasingly involved in working with organisations and their people to develop a plan. BACP Workplace is involved in the development of a day’s CPD, to be held in Edinburgh in April next year. Do hold the date if this interests you; and if this is a specialism of yours, you might consider putting in a speaker proposal form.

As World Mental Health Day approached, with its focus on the workplace, it was time to pause and think about what really makes a difference to people at work. In ‘Time to walk the walk’, I spoke with practitioners about our work, and how creating cultural change is about more than writing a policy or a slogan. The culture of an organisation may not be immediately visible, but it’s palpable when you walk in the door. Nicola Neath sums it up: ‘Morale and culture emerge through the relationships between people, and that’s what we do as therapists, we build good relationships with others, and that’s why organisations need us’.

As we enter the dark months, I’ll raise a cocoa to that and hope that you’ll find much to sustain you in your work in this issue of Counselling at Work.