The balance of power
Helping our clients to find their power after an experience of workplace bullying is all part of the recovery process. Sarah Anderton explores how we help bring about change

Notes from the Chair
Nicola Neath - Energy, time and change 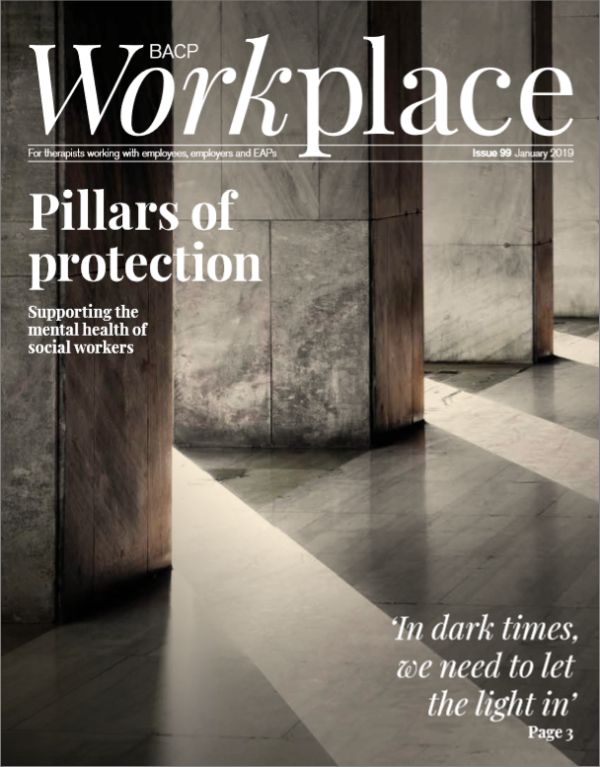 Editorial - Let the light in

The lead article, Pillars of protection, tells a story of how one practitioner supports the mental health of those on the frontline.

Working with social workers, Sass Boucher makes a compelling case for a better model of care for those who devote their working lives to helping others. Knowing what drives helpers to help, Sass says: ‘I have yet to meet a social worker who fell into the role.’

Whether you call it a vocation, a calling, or soul work, the politics of austerity have depleted more than the meagre budgets, meaning it’s increasingly hard for dedicated staff to stay well in their work. When conversation is seen as ‘skiving’ and a lunch break and loo breaks are luxuries – the system itself is sick.

A recent report by Professor Philip Aston, the UN’s special rapporteur on extreme poverty and human rights in the UK, found that compassion had been abandoned during almost a decade of austerity policies sweeping away the key elements of the post-war social contract. He made the damning assessment that about 14 million people, a fifth of the population, live in poverty and 1.5 million are destitute. He described the levels of child poverty as ‘not just a disgrace, but a social calamity and an economic disaster’.1

The links between poverty and mental ill health are clear, but there’s a disconnect between the UK Government’s rhetoric about mental health and people’s access to mental health support. It’s timely that Nancy Rowland has returned to BACP as one of our Vice-Presidents determined to have conversations with people in power, with politicians and policy makers, to talk about the role of the counselling profession in providing mental health services.

In dark times, we need to let the light in. So, let’s keep sharing the stories of our transformative work because every day we hold those staff who provide vital services in our society. We help them to feel lighter in their work and to recover the strength to carry on with their professional roles, creating safer, healthier and more compassionate workplaces.