Letesia Gibson is founder of New Ways, a consultancy supporting organisations that seek to embed cultural change. It was set up with a vision to support both businesses and charities to step into new and better ways of working that are fit for purpose for a progressive, diverse Britain. www.timefornewways.com

Are you with me?’, is a question that job seekers often ask themselves when they are searching for a new employer, as well as by those questioning whether their existing workplace is somewhere they want to stay. According to some recent research, 41% of people planning to leave their current workplace in the next six to 12 months, cite poor workplace culture as a key reason for their exit.1 Increasingly, it seems, people are seeking a work culture that demonstrates integrity, which stands up for doing the right thing and which focuses on diversity and inclusion in meaningful ways. Yet, so often what I witness in business is a disconnect between the intention of creating allyship and the reality of making allyship action a reality.

The risks of inaction over allyship

I followed the events unfolding at the Yorkshire Cricket Club2 at the end of last year. The painful failings of the club’s internal culture led to a collective denial of the impacts of racism on cricketer, Azeem Rafiq, which were written off as ‘banter’.3 With new leadership and fresh ownership of the problem, meaningful action now appears possible and there is a commitment to addressing the embedded issues. While Yorkshire Cricket Club hit the news headlines dramatically, they are not alone as an organisation to (knowingly or not) allow racism to continue to impact the experience of the workforce of colour because of inaction.

There is a myriad of possible reasons that underpin inaction in an organisation, and few come from a place of intending to cause harm to others. However, the potential consequences of inaction can lead to poor outcomes and damage reputation. I can’t help but wonder, how many missed opportunities were there at Yorkshire Cricket Club for creating stronger allyship that might have led to a different outcome?

Let’s imagine how things might have played out differently, if a stronger culture of allyship at the club had existed. Could a formal complaint have been avoided, if this were the case? Would Azeem Rafiq have felt greater solidarity from his team, easing his distress? Perhaps the issue of racism-infused ‘banter’ might have been raised by those observing it earlier, providing support to Rafiq. If learning and development opportunities had been offered to players, this could have helped to raise the level of cultural intelligence needed in a diverse team, and a conversation as a result of this may have offered a moment to reflect on behaviour towards people who are marginalised in the workplace.

In truth, we’ll never know if these kinds of interventions could have led to a different outcome. However, simply raising the questions can help us to understand how costly inaction can be to an organisation, and get to the heart of why building a culture of allyship is so vital for organisations, if we are to shift from inaction to action in addressing embedded racism.

Are there risks to being an ally?

Instead, what I often hear is that individuals are worried about how becoming an ally may be a risk for them in their workplace, and comments like these are not uncommon:

‘I don’t want to offend someone. Who am I to speak up on their behalf?’
‘I’d need to know all of the details and feel certain before I stepped in and said something.’
‘I’m sure they didn’t mean it intentionally. I know they’re not a bad person.’

When an organisation is learning how to become an inclusive and discrimination-free workplace, there’s often an assumption that there is ‘a right way’ and ‘a wrong way’ to deal with issues. This thinking impedes our ability to be with the complex, messy, grey area that sits in between, and it is not a space that organisations like to be in. Yet, it’s essential that we learn how to inhabit this space because, when there is a need for absolute certainty, allyship struggles to flourish, because our organisations don’t yet have a shared understanding of what is and what isn’t racist.

Who has power and influence?

One definition of allyship describes it as, ‘The in-group taking actions of solidarity in service to the out-group’. Interestingly, a challenge to this definition, is that people often don’t consider themselves as being part of the in-group, as was recently highlighted in a study on workplace inclusion by McKinsey.4 Feeling like ‘an outsider’ is an experience that many of us can relate to in the workplace, whether due to gender, class, education, accent, or a lack of seniority. Whatever the reason, it can undermine an employee’s perceived ability to use their influence to create change for others.

I’ve heard people mention grand gestures where allies have whistle blown, or courageously called out bad behaviour in the workplace, where they are seen as someone who is brave, confident and influential, meaning allies can be mythologised as ‘someone who is not like me’. There is often a disconnect between what we think allyship should look like and the simple allyship actions that can make a difference.

Therefore, it’s important not to overlook these actions, including: listening to the needs of marginalised groups; investing in understanding the workplace situations that create challenges for these groups of people; creating opportunities for learning around inappropriate behaviour which is rooted in racism; and talking and listening to the person on the receiving end of observed racism, after the event.

Allyship should feel authentic to who we are and the influence we can use in the workplace, and we will all have a platform to create change that looks and feels different from the next person.

The power of allyship

It’s not always easy to find out what is and isn’t OK in organisations. Instead, we usually learn through osmosis from the culture and behaviours that we observe. Information about our stance on discrimination too often only lives in formal policies that most employees are not familiar with, and which don’t always adequately deal with the full array of everyday or structural racism incidences that can occur.

So, there’s real value in looking at allyship through an organisational lens, being clear about how it is being defined and with a commitment to supporting people to become an ally in a way that gives them confidence that they are aligned with the organisation’s position. A positive initiative from an HR or inclusivity and diversity team, to inspire confident action and establish the concept of allyship as a successful concept, could include the following:

Allyship doesn’t live in book clubs and self-learning, although they both may form the foundation of it. Allyship is about taking actions that are visible to others in the organisation. It helps in taking visible action if allies don’t feel the pressure to act in the moment, at least in the early days of practising allyship. That’s because in-the-moment action can take a lot of skill, to manage both the emotions (of everyone in the room) and communicate effectively. Taking the space to step away from strong emotions and reactions, to create a strategy for action, can become a useful opportunity to learn, rather than an accusation that may be met with defensiveness.

I can’t help but wonder, how many missed opportunities were there at Yorkshire Cricket Club for creating stronger allyship that might have led to a different outcome?

I often invite clients to reflect on three questions to help them to build their understanding of their allyship action:

Being an ally can feel like a lonely place to be, if we are acting as just one person taking individual action. Sharing learnings between allies to strengthen skills, grow collective confidence to be open and vulnerable, and to increase understanding of what works and what doesn’t, is hugely valuable. Given how much growth many companies need in order to become truly inclusive and discrimination-free spaces, this kind of investment is vital.

Allyship is the cornerstone of a workplace that is committed to learning to be anti-racist. It can help support an organisational culture that is able to look at itself and question habits which reinforce an undesirable status quo. It’s an important mechanism to build trust and relationships across a diverse workforce that is rooted in shared beliefs and values – and it’s essential if companies want to attract a wider range of people to their businesses. Beyond that, it shows we really care about the experience and opportunities of all our people. My hope is that 2022 is the year where we will see more companies prioritising allyship to create stronger foundations for their work in equality, diversity and inclusivity. 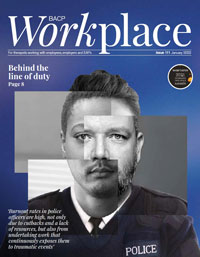 The quarterly journal of BACP Workplace division. For therapists working with employers, employees and EAPs.