Mental health, Brexit and work (free article)
Nicola Banning argues that it’s time for the counselling profession to get out of its comfort zone and speak out about the impact of Brexit on mental health at work and the future of jobs, including our own

When mothers return to work
Coach Jane Moffett works with women as they become a mother and adapt to their new world and identity. She shares her research on the value of maternity coaching

When panic strikes
Employers need to do more to support employees who experience panic attacks. Sue Christy explains how counsellors can help

Attachment theory comes to work
Understanding our first attachments can help us to navigate the world of work. Nicola Neath talks to Nicola Banning

Q&A Starting out
I’m a newly qualified counsellor. How do I get into the workplace sector? BACP Workplace members address your queries 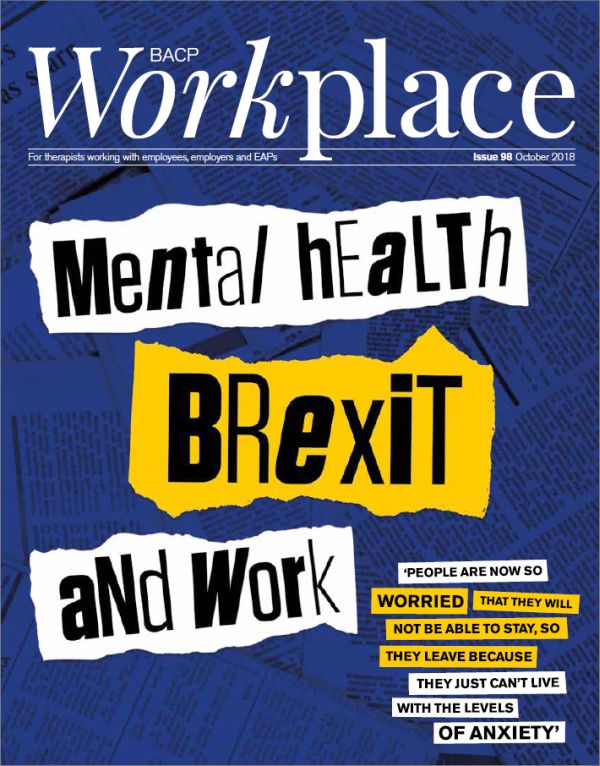 Rage Becomes Her is a timely book for many a woman living in the 21st century, including me. Written by the American writer Soraya Chemaly, it makes the case for harnessing female anger and using it for social change. All too often, women say, ‘I’m tired’ or ‘I’m stressed’, when in fact, what we really mean is, ‘I’m angry and I don’t know what to do about it’.

While anger in a man reinforces masculinity and ideas about how the world works, anger in a woman is transgressive, because to assert anger is to claim that something going on around you has to change.

OK, I’m angry. I’m trying to live in a world that doesn’t make much sense.

The values and ethics of our profession are deeply embedded into my way of being, with the need to do no harm, to respect human rights and dignity and to support better quality relationships between people. In tandem, I’m observing a national act of self-harm take place, an ugly public discourse, exacerbating tensions and divisions between people which emerge in the counselling room as anxiety, fear, despair and powerlessness.

The lead article on Brexit and mental health at work explores what’s happening to our clients, organisations and the workplace sector as we face the consequences of the 2016 EU referendum. Ten years on since the 2008 financial crash, and having worked with those on the frontline of our public services, talk of a Brexit dividend is hard to swallow. Just as well, as, according to the Conservative MP, Jacob Rees-Mogg, the overwhelming benefits of Brexit will be in the next 50 years, so we need to be patient.

My daughter and her peers will be 60, and no doubt ready to be overwhelmed.

As empaths and listeners, therapists are professional knowers about the society in which we live. But, we need to remember to look up because what’s happening is taking place in a wider political and geopolitical context. The anger you feel, Chemaly says, demands that society does something about it, because anger is the emotion of injustice. It’s a signal that lets you know that something is wrong.