Wounded at work (free article)
Are counsellors the antidote to toxic workplaces? Helen Jones makes the case for working with the underlying causes of ill health at work.

All change
Fiona Dunkley and Felicity Runchman consider how restructuring, redundancy and change impact on the mental health of employees and how employers can help.

Generation next
Colette Lewis explores how we can support the next generation of workplace practitioners. She considers what trainees need in order to thrive.

Better conversations about... when a baby dies
Jane Moffett looks at how employers can support parents after the loss of a baby.

Workplace matters
Sandi Mann: Are you an imposter? 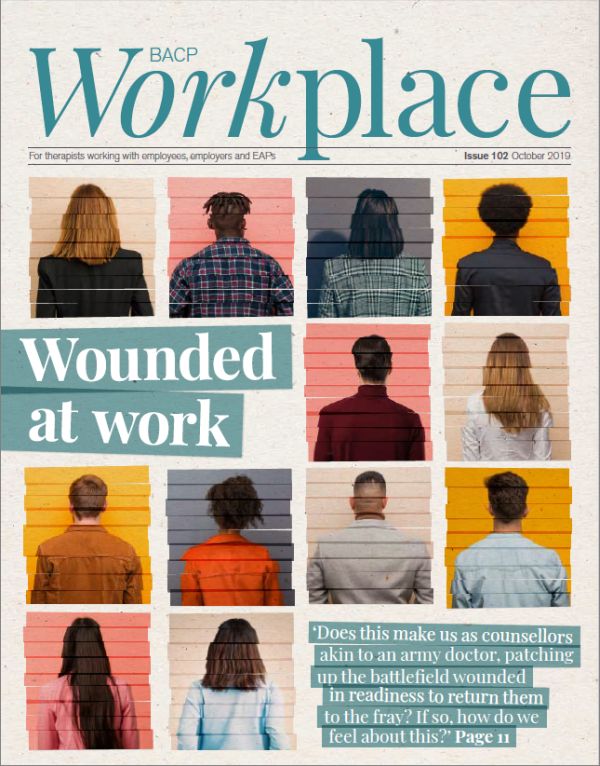 Divisional members and subscribers can download the pdf of this issue from the BACP Workplace archive.

Channel 4’s Political Editor, Gary Gibbons, recently remarked that the House of Commons must surely be one of the most clinically depressed workplaces in the UK.

As I write, MPs have just returned to their place of work after the proroguing of parliament, some of whom face daily death threats to themselves and their children and with inflammatory rhetoric reaching an all-time low. So, it’s fitting that our lead article is on toxic workplaces.

Helen Jones gave a rousing talk at the BACP Workplace Working with mental health in the workplace conference in June and captures it here in, ‘Wounded at work’. She asks, if we take referrals from an organisation and we become aware that an organisation’s toxic environment is harming our client, aren’t we complicit in the damage to our client if we don’t speak up? If we do speak up, how do we do this ethically?

Nearly 20 years ago when I embarked on my training, the focus of my diploma was on counselling in an organisational context. The context mattered to me because the counselling was not just about ‘the client’ and ‘the counsellor’ but about the context – and ours is the workplace in the 21st century. I learnt to work ‘downstream’ with the client – and ‘upstream’ with the organisation.

If you’re familiar with the book/TV series, The Handmaid’s Tale, you’ll know that ‘context is all’ is a phrase silently spoken by Offred, reminding us that every moment of our lives, from the most mundane, to the grandiose, takes its meaning from the wider social and political reality that conditions us.

I despair when people minimise the power of words. What we say has meaning. Words have consequences. I’ll spare you a description of the social and political era that we’re living through because you’ll have heard it all before, but what’s going on ‘out there’ is relevant to what’s taking place in our therapy rooms and in our workplaces.

Apparently, UK dentists are experiencing an epidemic of cracked teeth – which I’ve heard attributed to a nation that’s grinding its teeth. Possibly it’s one way of coping with the collective anxiety, whether about the political crisis or environmental crisis we’re facing – and, of course, we therapists are not immune. I don’t doubt we are part of the solution to the pervading toxicity, but we need containment too.