Using cognitive analytic therapy in a workplace counselling service
Jill Collins considers how to offer a useful therapeutic experience to clients and their employers, which is ethically sound and within the resources available 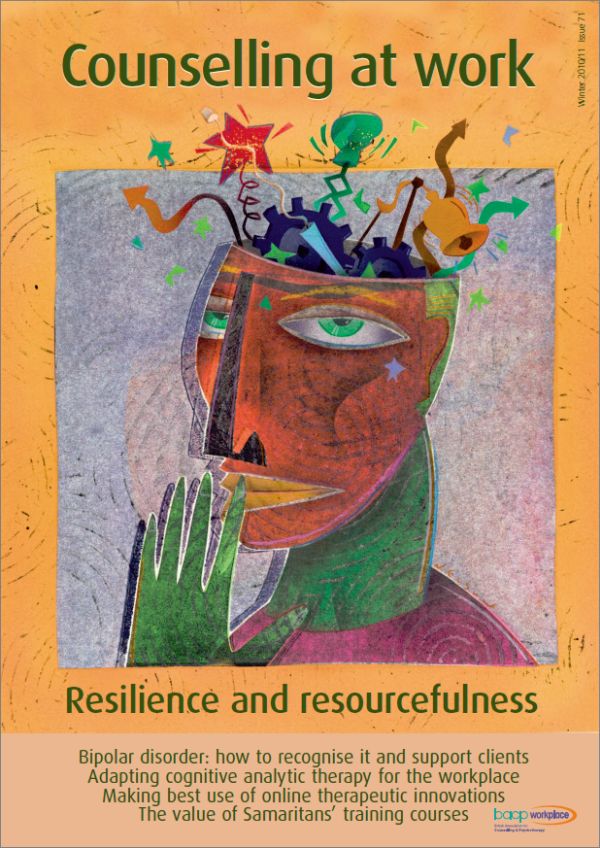 Articles from this issue are not yet available online. Divisional members and subscribers can download the pdf from the Counselling at Work archive.

Allow me to introduce to you a new member of our household, Mr P – Phasianus colchicus to his learned friends and ornithologists; a hardy young male pheasant to us.

Mr P has been an increasingly frequent visitor to our garden. In the early days, he was quite a nervy bird. He could see us cowering behind curtains as we sought a good peek at his colourful plumage. However, in his little pheasant brain, he interpreted this curtain-twitching as a threat, which triggered his own fight or flight response. Usually this would begin with an aimless sprint from one end of the garden and then back again, his spindly legs whirling fast underneath his chunky body. In no time, he’d be back, happily pecking away and you could just tell that he had no idea what he’d been running away from in the first place. In evolutionary terms, his cognitive abilities seemed to rival that of a goldfish.

Then the snows came down, the temperatures plummeted and the harsh easterly winds came in from… well, the east. Mr P had to become both resilient and resourceful to survive the tough conditions. His usual home comprised the side of a pine tree which we considered to be draughty, poorly insulated and prone to squatters, though the fallen pine needles did release a delightful Alpine aroma.

But when heavy snow caused a large branch to break off, he moved into a much more habitable and cosy wee nest of saplings. As we continued to feed the birds with nuts and suet, and defrost the bird bath, Mr P started to become far more tame. He didn’t run away from us, so he conserved more energy. Clever. And now happy to feed out of our hands, he gets the choicest cuts of scrumptious bird food. Once he’s had his fill, he’ll amble back to his des-res, rubbing his full belly before a wee, well-earned siesta.

The resilience and resourcefulness embodied by Mr P has been a bit of a Robert the Bruce spider moment for me, albeit without the future of Scotland at stake. In times of financial austerity, a shrinking economy, and fears of a Euro meltdown, we all need to be resilient and resourceful, to be thinking differently, behaving differently and being different.

I’d like you to join Andrea Woodside in her quest for us all in organisations to consider bipolar differently. It’s an enlightening article and one that I hope will help you shift your own position.

Samaritans are a well-known, well-regarded and well-used organisation, yet did you know about their workplace training programmes? Check them out. Incidentally, I met one of the co-authors, Barry Lewis, at this year’s Health and Wellbeing at Work exhibition and conference at the NEC. At the time of writing, BACP is hoping to attend this exhibition in March 2011, so if you’re around, do come on down and say Hi… or lap up the many keynote sessions – several of the BACP Workplace executive will be speaking.

Executive committee member Jill Collins helps to tease out the complexities of cognitive analytic therapy and shares her experience of a more time-limited model.

Thanks also to Kate Anthony and her colleague DeeAnna Merz Nagel. I’d heard about their Online Therapy Institute and wanted to find out more. You can read my interview with them in this issue. And congratulations to Kate on her newly awarded DPsych.

Speaking of tough economic climes, I’m grateful to Alice Howard of the Consumer Financial Education Body who has provided us with a fascinating article on ‘financial capability’ and the impact on wellbeing.

As we embark on a new year, may I wish you a resilient and resourceful 2011 and I hope, like Mr P, you cope successfully with this harsh winter. It’s been fowl, hasn’t it!

I hope you enjoy this issue.