The sports coach meets the executive coach: what can we learn from sports coaching? (free article)
Erik de Haan and Pat McCarry

Message from the chair

Around the table: ‘How do your clients find you?’
Compiled by Eve Menezes Cunningham

Why I became a coach
Tasha Colbert 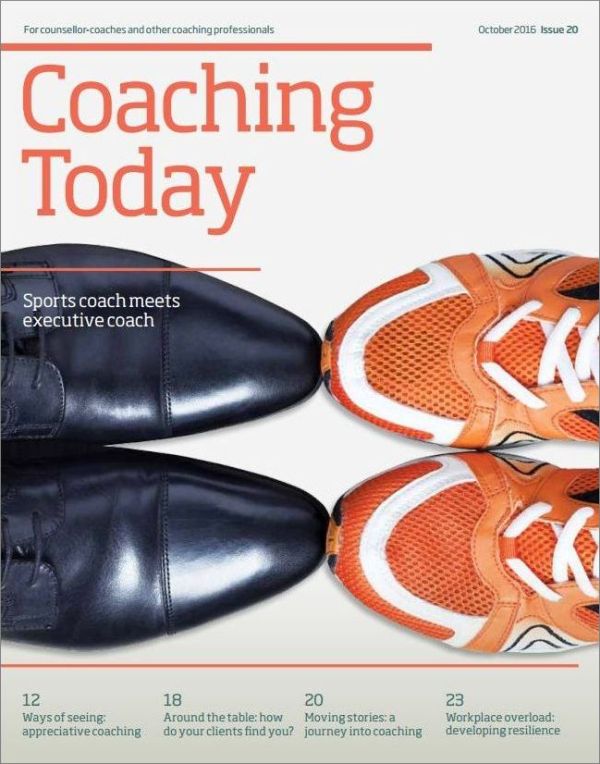 I hope you all had a wonderful summer break. As I write this column, we are approaching the end of summer, and the 2016 Olympics have recently drawn to a close. I will confess here, I am not a huge sports fan – however, I never fail to be impressed by the skill displayed by the world’s top athletes, and I am aware that they are in that position due to years of dedication, application and sheer hard graft. Top athletes are not created overnight. (I trained as a classical ballet dancer, so I have something approaching first-hand experience of this!) So, while not a sports fan as such, I do remain fascinated by the process that goes into the creation of a top athlete or player at the peak of their game.

Therefore, when regular Coaching Today contributor Erik de Haan approached me with an idea for a special feature looking at the skills and qualities of a modern day sports coach and what coaches who work at executive and leadership level can learn from them, I was intrigued. Erik introduced me to his co-author, Pat McCarry, a former football coach and sports educator in the US, now working in organisations as a leadership coach. After reading the first draft of their original paper (a massive behemoth of over 6,000 words), I was so inspired, I asked them to consider creating a two-part series from the material, and I am pleased to publish part one here.

Reading Erik and Pat’s paper gave me cause to think back to my own early days of coaching training. One of the first books I read on coaching was Myles Downey’s Effective Coaching,1 with a foreword by Timothy Gallwey, author of The Inner Game of Tennis.2 The original edition of Downey’s book was published in 1999, when coaching was first emerging as a profession beyond the arena of sports coaching, and within it, the author makes constant reference to Gallwey’s Inner Game, drawing continuous parallels between sports coaching and executive coaching. (Indeed Downey refers to his clients or coaches as ‘players’, emphasising the collaborative and non-directive nature of the coaching relationship.)

It feels especially appropriate to pause, take stock and revisit the history of coaching and its many applications over the years in this particular issue, as this is the one in which we say a fond farewell to our Chair, Gill Fennings-Monkman, after three years in her role on the BACP Coaching Executive. In her final column for this journal, Gill celebrates the assiduous work of both her current Executive and those who have gone before, and announces some exciting developments for coaching within BACP.

I would also like to take the time to honour Gill’s presence within BACP Coaching. When I first took on the role as editor of this journal, Gill was then Executive Specialist for Diversity within the team, and she responded to my early call for contributors with characteristic grace and enthusiasm, grabbing the opportunity to shout about coaching with aplomb. Since then, she has continued to work tirelessly on behalf of therapists who coach within BACP, forming alliances with other professional bodies and organisations, and ensuring that your work is honoured, recognised and supported, both within BACP and beyond.

I’m sure you will all join with me in celebrating Gill’s time as Chair and agree that we owe her a huge thank you for her hard work and all she has achieved for the coaching division during her time in post.