Examining the evidence for pre-trial therapy (free article)
Counselling clients who are potential witnesses in a trial of their alleged abusers is challenging. Peter Jenkins and Maddie Nixon report.

Working in the therapy factory
The IAPT model dominates mental health services in England. Elizabeth Cotton argues that the model is flawed and downgrades therapy.

In my view
Some thoughts on IAPT from three practitioners

Together we're better
The NHS can improve access to mental health services and boost population wellbeing by working in partnership with the local community. Rhona Howitt, Angela Byrne and Jack Shieh share their experiences of partnership working.

Counselling in primary care
Elaine Davies: Starting at the beginning

Profile
An interview with Rachel Johnston 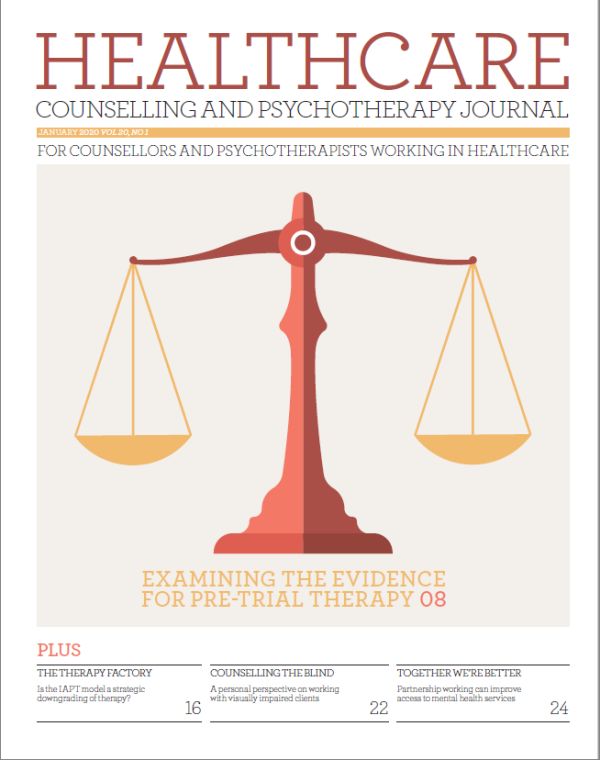 Members and subscribers can download the pdf of this issue from the Healthcare Counselling and Psychotherapy Journal archive.

We are still in the first month of the new year, which is perhaps a time when we are all more hopeful for the future. I don’t know how many of you make resolutions, but they seem to suggest a trust in our potential to change for the better. It’s a sentiment that’s echoed in our sessions with clients, as well as our own personal development. Would any of us have the strength to carry out such challenging work if we did not believe in the possibility of change?

We also have a new government. Some readers might be more or less optimistic about the future with Boris Johnson as Prime Minister. But whatever your political allegiance, you can rest assured that BACP will continue to lobby for mental health to rise to the top of the political agenda, with a call for improved access to and choice of psychological therapies.

And that brings me on to IAPT. The IAPT model was introduced by NHS England back in 2008, with the stated aim of boosting the nation’s mental health. It’s perhaps worth remembering that one of the key figures behind the IAPT model was Richard Layard, a distinguished economist, who was concerned about the social cost of the failure to tackle depression and anxiety. He also argued that psychological therapies pay for themselves through increased employment and the reduced cost of other healthcare. In other words, IAPT was intended to bring economic as well as psychological benefits. There’s nothing wrong with that, of course. Or is there?

Elizabeth Cotton is of the opinion that the IAPT model is less about care and more about money. In her article she outlines her belief that IAPT is based on a strategic downgrading of therapy that is dangerous to both practitioners and clients. It’s strong stuff, but it’s an important article and one that adds value to the debate. We also hear from three of our regular contributors, all of whom have experience of working with IAPT. You might have your own views about IAPT. If so, it would be good to hear from you. Feedback from readers is always welcome and can help to shape not only the content of the journal but also BACP policy. And please feel free to contact me if you would like to contribute to a future issue of the journal.

Whatever your therapeutic model, many practitioners will no doubt have met with clients who are struggling to come to terms with trauma and abuse. Peter Jenkins and Maddie Nixon explain the importance for all therapists of understanding the potential legal implications of their work. They also discuss the specifics of pre-trial therapy and present the results of a recent survey of practitioners who operate in this complex and sometimes controversial area.

Chris Taylor works with clients who are blind and visually impaired. His description of the challenges of his work is personal and moving. If you are anything like me, it might also make you question some of your own assumptions and attitudes towards clients with disabilities.

It strikes me that we could all learn something from the article on partnership working, particularly in these politically divisive times. The examples of partnerships in the East London NHS Foundation Trust are an inspiration. They show just how much can be achieved if we recognise and respect different and diverse perspectives. I’m even thinking of sending a copy of the article to the Prime Minister!

So, it’s a new year with a new government – and the journal also has a new editor. I hope any changes I make in forthcoming issues will be for the better. But I also hope they will honour the work of my predecessor, as well as the views of colleagues and readers.