Adding it up
How many hours do you have to work to get the income you’d like? James Rye does the sums for you

Sleeping is no mean art
Up to one third of the population suffers from insomnia. It’s vital counsellors and psychotherapists consider the consequences, explains Julia Bueno

So it goes
Reflecting on his 37-year career as a clinical psychologist and psychotherapist, John Marzillier explains how his early optimism in science was tempered by the realities of clinical experience 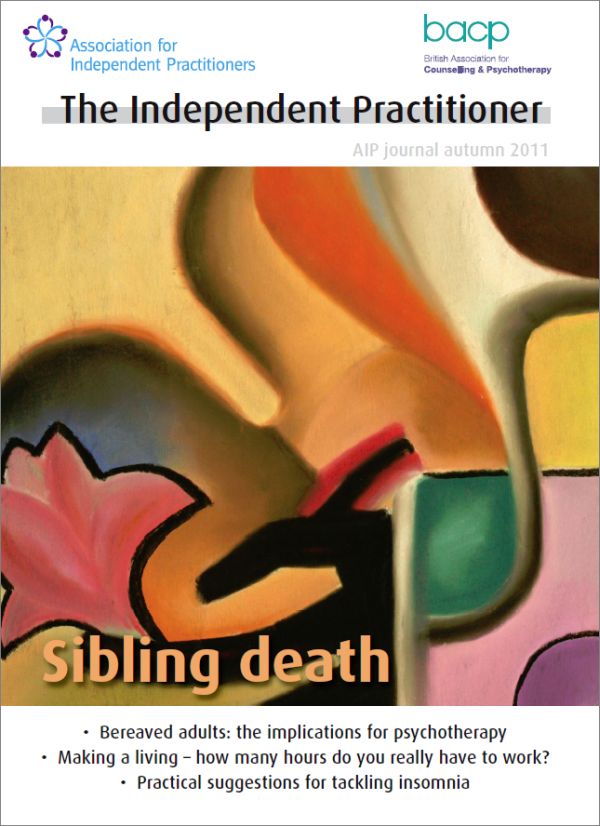 Articles from this issue are not yet available online. Divisional members and subscribers can download the pdf from the Private Practice archive.

Seeking inspiration for this editorial, I picked up the Guardian and alighted on a news report claiming that more than a third of the population of Europe – 164 million people – suffer from a mental disorder each year. The research from the European College of Neuropsychopharmacology finds that anxiety disorders top the list: 14 per cent suffer from one or more each year, while 6.9 per cent have depression and 5.4 per cent dementia.

The Guardian’s health editor reports that the study reveals a lack of treatment for mental disorders. Only 30-52 per cent have any contact with a health professional and only 8-16 per cent are in contact with a specialist. Most disturbingly, according to Hans-Ulrich Wittchen, one of the authors of the report, a tiny minority, 2-9 per cent, ‘receive minimally adequate treatment’. David Nutt, professor of neuropsychopharmacology at Imperial College London, is quoted as saying, ‘It is clear that there is significant under-funding of research.’

What does this have to do with those of us in private practice as counsellors and psychotherapists? Well, for a start it highlights the crucial need for more practitioner research, and as increasingly more practice takes place in  independent settings, it indicates the important role AIP members can play towards meeting that end. In the past four years, AIP membership has grown by 38 per cent, so the scope for new research amongst independent  practitioners is immense. In his article, John McLeod, a member of the BACP Research Committee, invites members to consider submitting proposals for next year’s Research Conference, which takes place in Edinburgh on 11-12 May 2012.

And research doesn’t have to follow a traditional scientific methodology to be reported at the conference. One of the strengths of counselling and psychotherapy research in the UK, argues McLeod, lies in its acceptance of  methodological pluralism – all kinds of research methodologies have a role to play, from randomised controlled trials (RCTs) to authoethnography. It may well be the case that, to date, policy makers have mostly been influenced by RCT evidence to support of the efficacy of our work with clients, but, as he writes in the Letters pages of the September issue of Therapy Today, McLeod believes that the main reason for resistance to non-RCT evidence within the corridors of power is that committees have never been presented with substantial amounts of evidence derived from non-RCT methodologies.

For those of us averse to the medical model that has dominated therapy research to date, it is encouraging, I believe, to read that alternative research methodologies are not only invited but also welcomed at the Research Conference. In this rush to provide good quality research to evidence our efficacy, however, it is also crucial to remember that we are not only in the business of providing symptom relief. As John Marzillier writes in his honest and moving account of his 37-year career as a clinical psychologist and therapist: ‘Psychotherapy is not only about getting better, for some people the regular support, the opportunity to unburden themselves in a place of safety, is just as important, perhaps more so.’

Finally, as this is the last issue of The Independent Practitioner to be published in its current format before its redesign and relaunch in December, I would like to take this opportunity to thank all those who have worked on the journal to date, and most of all Fran Shall for her creativity, commitment and enthusiasm as designer.