My story
Hanging on the telephone
Tamar Posner continued her therapy over the phone when her therapist was suddenly unable to work face to face, and discovered the experience had some unexpected benefits

My story
Time to stand and stare
John Crew reflects on his choice to continue part time in private practice and, as he approaches 70, wonders when it will be time to retire 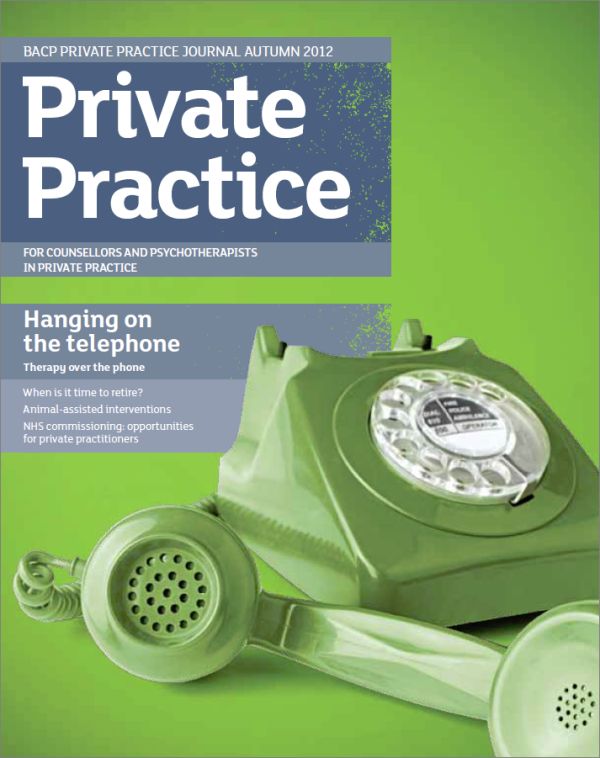 Articles from this issue are not yet available online. Divisional members and subscribers can download the pdf from the Private Practice archive.

I don’t know about you but I’ve definitely noticed a decrease in the number of new referrals I’ve received so far this year. I’ve heard similar reports from other therapists, as well as people telling me they’ve noticed how clients are asking for more flexible ways of engaging with therapy: for fortnightly rather than weekly sessions, for instance, or for shorter-term contracts than might previously have been the case.

This leads me to suspect that those of us in private practice are now beginning to feel the impact of the double-dip recession and flat-lining UK economy. The service we provide is often seen by clients as a ‘discretionary spend’ – the first expenditure to be cut when times are tight. Complementary therapists I know tell me they’re being impacted in similar ways – not a cheery prospect given that the UK economy is not now expected to recover until 2014.

The impact of the recession on mental health is now an important matter for debate and public policy. The mental health charity SANE reports a marked increase in the number of people contacting their helpline with depression and anxiety due to financial uncertainty. And yet, as chief executive Marjorie Wallace points out, ‘A vicious circle is being created with cuts to mental health services coinciding with increased demand, especially for psychological counselling, leaving  people with no one to turn to at times of crisis.’

The statistics are alarming. A recent report published by the LSE Mental Health Policy Group finds that of the six million people in Britain who currently have depression, only a quarter of these are receiving treatment. The cost to the NHS of these untreated cases is huge because, the report finds, among people under 65, almost half of all physical ill health is mental illness related, costing the NHS at least £10 billion a year. The fact that the Government has responded to the gloomy outlook by committing £400 million to complete the national rollout of IAPT, is clearly a good thing. But it remains to be seen what impact changes to NHS commissioning due to the revised Health and Social Care Bill will have on service provision. For those of you who receive referrals from your local GP, new commissioning guidelines may affect your ability to receive these because the Government aims to regulate the NHS market through licensing service providers through the implementation of the new Any Qualified Provider (AQP) scheme.

In response to these changes, BACP is supporting members via a range of online resources, clinical commissioning forum events, and advice and information by phone and email. Nichola Watson and Louise Robinson explain the likely impact of the changes on therapists in private practice. Because the requirements and criteria set for AQP are geared towards services or agencies rather than individuals, they recommend that members currently working in GP practices consider collaborating to form a consortium or social enterprise.

BACP Private Practice is responding to the current climate by arranging its biggest ever conference for Saturday 9 February 2013 called ‘Depression: what’s therapy got to do with it?’ Put the date in your diary.