My perspective
Soldier, veteran, survivor
Mervyn Wynne Jones offers an insight into life in the armed forces and the challenges for civilian therapists engaging with this client group

Interview
Dubious diagnoses and the medicalisation of distress
Alan Pope talks to James Davies about his new book Cracked: why psychiatry is doing more harm than good

Practice matters
The coach trip
Carolyn Mumby profiles seven practitioners who, like her, journey through the territory of therapy and coaching 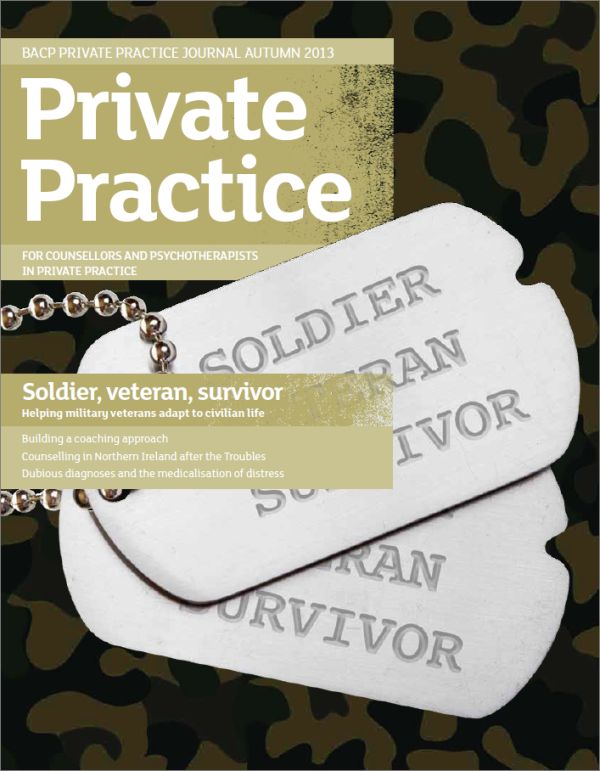 There are an estimated five million military veterans in the UK, more than a quarter of whom (27.2 per cent) have a common mental health problem.1 An investigation of the physical and psychological health of UK armed forces personnel by the King’s Centre for Military Health Research finds that veterans are at high risk of anxiety, depression, suicide, alcohol abuse and drug addiction.2 Research also finds that young British men who have served in the armed forces are three times more likely to have been convicted of violent offences than their civilian peers.3

Following more than a decade of war in Iraq and Afghanistan, Combat Stress, a charity specialising in the support of veterans with mental health problems, has seen a 10 per cent increase in the number of veterans seeking its help.4 And, as operations wind down in the Middle East, coupled with increasing redundancies in the military, the charity is expecting more veterans to seek its help as greater numbers of armed forces personnel transfer from military to civilian life.

This growth in the provision of mental health support for former armed forces personnel by charities like Combat Stress reflects difficulties experienced by veterans when accessing appropriate services in the NHS. A primary obstacle often cited is the lack of understanding of military life within a civilian system. The same, of course, is the case for military veterans seeking access to civilian therapists in private practice.

The multiple challenges facing armed forces personnel as they leave the military and negotiate the transition to civilian life are explored in two complementary articles in this issue. Michael Stott, who served in the Royal Army Physical Training Corps and now provides emotional support to veterans, provides a personal insight into life in the military. Mervyn Wynne Jones, who had a career as a civilian UK armed forces press officer and 20 years’ service as a military reservist, considers the challenges for civilian therapists interested in engaging with this client group.

Among the more serious mental health problems experienced by veterans is post-traumatic stress disorder (PTSD), which affects an estimated 4.8 per cent of veterans.1 Combat Stress warns that, of the 20,000 service men and women who leave the armed forces each year, around 1,000 are at risk of developing PTSD, and these often do not present themselves for treatment for a decade.4 Combat Stress still gets referrals from men who served in Northern Ireland, 15 years after the end of the armed conflict there. Julia Greer, a psychotherapist in private practice in Northern Ireland, contributes an informative article on the legacy of 30 years of armed conflict in her home country. I was shocked to learn that the highest recorded rate of PTSD in recent history is in Northern Ireland.5 As a companion piece to Julia’s article, I am very pleased to be publishing an extract from To Call Myself Beloved, Eina McHugh’s fascinating account of therapy from a client’s perspective and a thought-provoking insight into the trauma of life in Northern Ireland during the Troubles.

I hope you will find these and other articles in this issue of interest. If you have any feedback or thoughts of your own on these or any other subjects, please do get in touch.