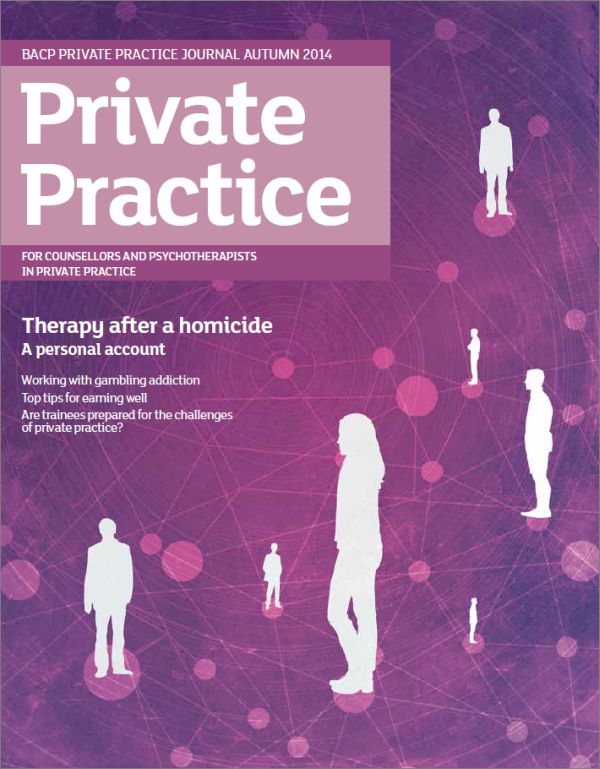 According to the Office for National Statistics (ONS), the number of self-employed workers in the UK has risen to its highest in 40 years.1 Around 4.6 million people work for themselves, or 15 per cent of the total number in employment.

Jobs that have seen a big rise in self-employment, the ONS reports, include management consultancy, photographers and chartered accountants. Given the rapidly changing landscape of our profession and cuts in staff positions in the statutory and voluntary sectors, it’s my guess that the number of self-employed counsellors and psychotherapists is also likely to have increased significantly. In a recent survey of over 4,500 representative BACP members, over a quarter (27 per cent) selected private practice as their main role, and over a third (35–40 per cent) selected it in addition to other activities.

Given this, I wonder how transparent therapy training providers are with prospective students about the scarcity of salaried positions for counsellors and psychotherapists? And, as at least one in four newly qualified practitioners can expect to make their living solely from self-employment, are trainees adequately prepared for the challenges of establishing and sustaining a viable private practice?

Not very and not enough, argues Liddy Carver in her article on the subject. Liddy suggests prospective students should ask training providers how they would rate their chances of earning a decent living on qualification. Like Liddy, I wonder if they would get an honest answer, given training institutions are more likely to be concerned with keeping numbers up than with students’ future employment prospects. She argues the current level of students qualifying each year remains higher than the market can sustain and that there’s a need to reduce their number in order to enhance opportunities for existing practitioners.

She also thinks training programmes should be skilling students to cope with the challenges of private practice, which include isolation, insecurity, and a fluctuating and potentially low income. On the last point, and at the risk of sounding gloomy, the same ONS study cited above found that, despite their increase in numbers, the average income of self-employed workers has slumped by 22 per cent since 2008. The TUC described the figures as ‘worrying’, as the pay of self-employed workers is typically around half that of people in staff positions.2 I suspect the average income of self-employed therapists might also reflect this differential.

Private Practice does what it can to redress this lack of information. In this issue, Catherine O’Riordan and James O’Riordan explore some underlying barriers that they say inhibit therapists from charging enough for, and making a living from, their service. And marketing experts Martin Hogg and Corrina Gordon-Barnes offer advice on how to thrive in a competitive market place and on earning a healthy income from your work.

Now for some good news for private practitioners. Perhaps partly in recognition of the challenges faced by self-employed members, BACP has created a new role of lead advisor for the private practice sector to join the team of lead advisors serving the other divisions, sectors and countries. Patti Wallace takes up the role of Lead Advisor, Private Practice for an initial period of one year, starting this month. The creation of this new role is of critical strategic importance for the division, which is the fastest growing of the BACP divisions, having achieved a 30 per cent growth in membership since re-launching as BACP Private Practice in 2011. We plan to include an interview with Patti in a future issue of this journal.

One significant aspect of the division’s activities that continues to expand is the number of regional networking groups now established across the country. I attended the inaugural meeting of the South London group, coordinated by Lesley Ludlow and Hatice Ocal, in July and was delighted to see so many fellow therapists there and to join the discussions about shared and individual experiences and interests. If you haven’t already attended a meeting in your region, I’d encourage you to do so. See Rayner Ward’s article and Division News for further details.

From practical to clinical matters, elsewhere in this issue Mark Dempster writes about his approach for working with clients addicted to gambling and Janet Nicholls provides advice for therapists working with clients bereaved by homicide. Finally, Heather Dale and Duncan Lawrence invite you to join a debate they kick start. They are concerned about gender inequality in our profession: women make up the vast majority of counsellors and psychotherapists – over four-fifths of the membership of BACP, for example – but it is the small minority of male therapists who rise disproportionately to positions of power and influence, they argue. Your views on this or any other topic covered in this issue, or exercising you at present, are most welcome. You can reach me on the email address below.