Outside in, inside out
Norman Wright on what’s being communicated when patients elect to undergo cosmetic procedures

From the Chair
Lesley Ludlow: Communication is key

Supervision
Jim Holloway: What are we up against 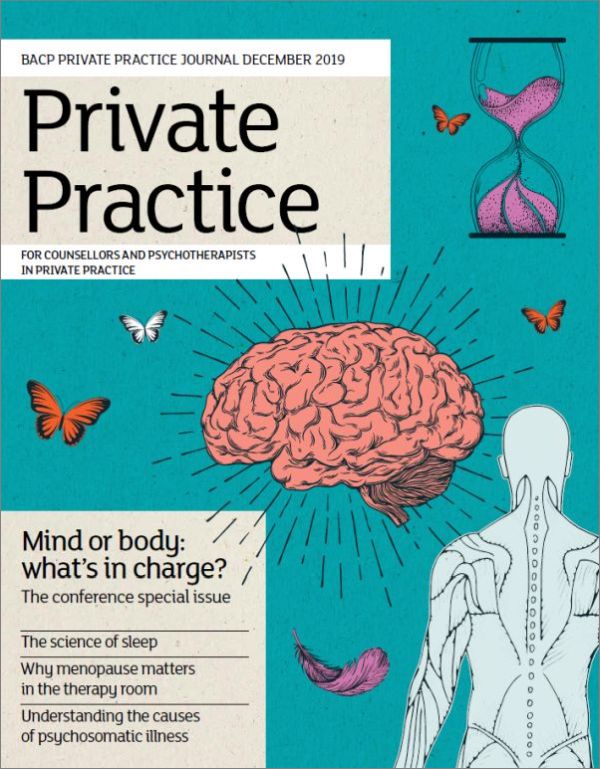 Divisional members and subscribers can download the pdf of this issue from the Private Practice archive.

In The inflamed mind: a radical new approach to depression, Professor Edward Bullmore, a psychiatrist who specialises in the workings of the human immune system, makes a scientific case for inflammation being a possible cause of depression.

Sarah Van Gogh reviews Professor Bullmore’s book and discusses his research in her regular ‘My Practice’ column. Professor Bullmore writes about the process by which our bodies fight infections by producing cells and chemical messengers to target and destroy alien intruders. But, he also explains that our immune systems can become overly sensitive and prone to act as if we are fighting an infection when we are not, and that this can result in inflammation spreading to the brain, affecting the emotional regulation network, and thereby causing depression.

Professor Bullmore argues that adverse childhood experiences, as well as extended periods of prolonged stress, can cause such a propensity, and this therefore has important implications for our work as counsellors and psychotherapists, as we begin to understand more about the ways in which our bodies can behave as if we are under biological threat, causing an inflammatory auto immune response, when we may not be under bacterial threat at all, and that this can then adversely affect our brains.

This leads neatly into the theme of this conference special issue on the mind-body connection, which includes features by both keynote speakers, Professor Alessandra Lemma, who writes that we cannot avoid telling the story our body narrates, and Diane Danzebrink, who argues the importance for all therapists of understanding the emotional, psychological and physiological impact of the menopause. This is particularly crucial given that, in a 2018 survey by the BBC, 48 per cent of women aged 50 to 55 reported their mental health was affected by their menopause symptoms.1

‘Therapists who understand menopause and the possible effects of hormone fluctuation,’ Diane writes, ‘have an ideal opportunity to close the current knowledge gap among both the public and healthcare professionals to empower their clients to seek out factual, evidence-based information to enable them to make informed choices about how they manage their symptoms. This can be life changing for some women.’

We also include features written by conference workshop presenters on topics ranging from body dysmorphia and eating disorders to the science of sleep and the potential psychological, emotional and physiological impacts of elected cosmetic surgery procedures. Each of the contributors responds to the question posed by the conference title, ‘Mind or Body: what’s in charge?’, and resoundingly concludes that psyche and soma are inextricably interlinked, and that the separate and distinct ways in which they are still sometimes unhelpfully treated within the Western medical model, are onerous at best, and damaging to health and wellbeing at worse.

In his feature, ‘Psyche and soma’, Peter Afford, whose book, Therapy in the age of neuroscience: a guide for counsellors and therapists, was recently published by Routledge, explains how neuroscience has ‘penetrated the mystery’ of the mind-body connection and ‘offers a picture of the whole person’. Also taking up Professor Bullmore’s research, mentioned earlier, Peter provides a user-friendly introduction to the science that explains how our brains and bodies affect each other via neural and biochemical pathways, and how mental activity generates emotional body states, and body states change the neural landscape in the brain, affecting how we feel, what we perceive and what we think about.

He goes on to explore the causations of psychosomatic illness, correcting the common misconception that psychosomatic illness is imaginary, but explaining how it ‘reflects something real happening in the brain, as well as the body’. Like Professor Bullmore, Peter writes about how childhood abuse and neglect and other traumatic life events can trigger psychosomatic illness, because of the effect of the stress response, activated by the release of cortisol into the bloodstream, on the immune system. When stress is severe and sustained, an excess of cortisol suppresses the immune system, increasing the risk of immune-related illnesses.

Given that we all somatise, and that stress and distress will inevitably be reflected in the way brain, mind and body function as an ensemble, Peter concludes by saying, ‘There’s probably a psychological element in any illness, and it’s the aspect of illness that therapy is able to address.’