Mental health: time for a rethink (free article)
Johnathan Sunley asks if making what troubles us a medical matter could be causing us to lose our minds

Sex addiction: the search for a secure base (free article)
Joanna Benfield on one explanation for why sexual compulsivity is a problem for an ever-growing number of people 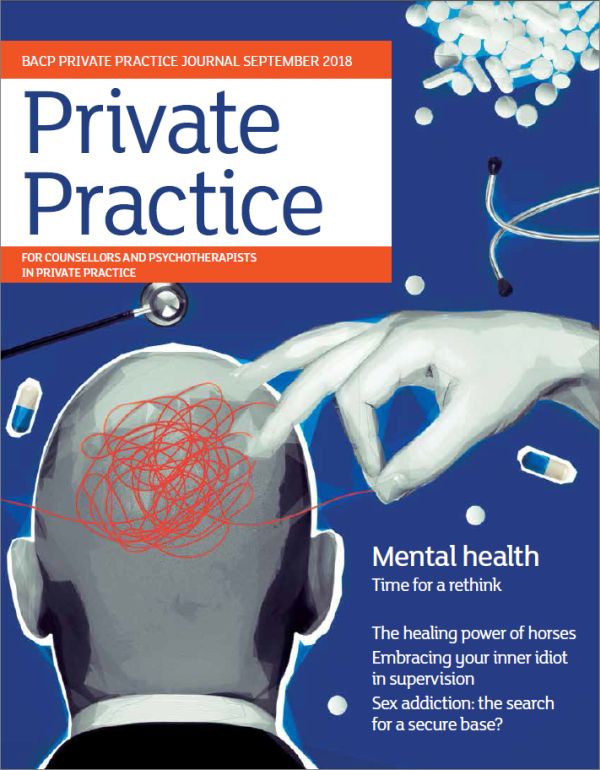 As an avid Radio 4 listener, I’m struck by the frequency with which mental health, from one perspective or another, crops up in the schedule.

One programme for Crossing Continents1 stopped me in my tracks recently. Including first-person testimony, it told the story of Aurelia Brouwers, a 29-year-old woman with a harrowing, longstanding history of mental health issues, including diagnoses of borderline personality disorder, attachment disorder and chronic depression, who was also chronically suicidal and suffered with anxiety and psychosis.

In a controversial case that provoked debate in the Netherlands, and made headlines around the world, Aurelia was helped to die on Friday 26 January by doctors in Holland, where, since 2002, euthanasia and doctor-assisted suicide have been legal, if a doctor is satisfied a patient’s suffering is ‘unbearable with no prospect of improvement’, and if there is ‘no reasonable alternative in the patient’s situation’. This includes, as in the case of people like Aurelia, when it is caused by psychiatric illness.2

I listened with a mix of shock, compassion and fascination, as, in turn, Aurelia explained her reasons for wanting to be voluntarily euthanised; a psychiatrist who assesses applicants and performs euthanasia at the Levenseindekliniek (‘End of Life’) Clinic in The Hague talked of how hard it is to make the decision in cases like Aurelia’s, where the patient is young and there is no physical illness; and psychiatrist Dr Frank Koerselman, one of Holland’s most outspoken critics of euthanasia in cases of mental illness, asked: ‘How could I know – how could anybody know – that her death wish was not a sign of her psychiatric disease?’2

Eighty-three deaths by euthanasia or assisted suicide were approved on psychiatric grounds in Holland last year.2 While this incidence is low in comparison with the 6,502 assisted deaths in the same year of people with a physical disease, it is nevertheless salutary. (Of course, it goes without saying that the vast majority of requests for euthanasia from people with mental illness are rejected by Dutch psychiatrists or GPs, and that those who are accepted will first of all have had to have done everything to help them diminish their symptoms.)

What stands out to me is that, in Dutch law, so long as a doctor is satisfied that a patient’s request for euthanasia is ‘voluntary and well considered’, mental and physical health are considered in broadly equivalent terms, and that these are predominantly biological, disease based and medical. Of course, an argument can be made for individuals who suffer ‘unbearably and hopelessly,’ as Aurelia says she did, and whose lives might in any case end in suicide (as hers might well have done – ‘I tried about 20 times,’ she says), that assisted suicide might offer a more humane way to die. But my heart went out, not just to Aurelia, whose hopelessness was such that her only relief was the thought of her impending death (which was two weeks away from the beginning of the making of the documentary), but also to the professionals in the position not only of making the decision to sanction her decision, but then administering the drug that would kill her (she drank the medication herself). And this, despite the fact that the biological basis of mental illness is widely contested and an area of considerable global debate.

Similarly, mental and physical health are now increasingly conflated in the discussion around mental health in the UK, in the media, in society at large, and certainly by the UK Government and in the NHS. In our cover feature, ‘Mental health: time for a rethink’, psychotherapist Johnathan Sunley, while welcoming the increasing openness about mental health, worries that ‘as a society – and as practitioners – we are being steered towards a very particular model for conceptualising suffering… one rooted in medicine rather than the mind’.

He believes the medical model risks robbing people of the very qualities essential to their feeling better: their agency and autonomy. ‘Often the very thing people find healing,’ he writes, ‘is being able to express the dark and sometimes cruel thoughts that preoccupy them, without these being either condemned as irrational (“There’s a pill you can take for that”) or condoned as normal and nothing to worry about (“We’re all on a spectrum, you know”).’ And he cautions against the prevailing view taking hold in the Western world today – ‘that suffering of any kind is an affront or abuse and should be eliminated’ – and argues for an approach that acknowledges the distress and disturbance people often endure, without medicalising their experiences.

Another psychological process often talked of in terms of being an ‘illness’ or ‘disease’ is addiction. Joanna Benfield, editor of the BACP Healthcare Counselling and Psychotherapy Journal, offers a different perspective in her feature ‘Sex addiction: the search for a secure base?’ Although most sex addiction treatment is based on a cognitive-behavioural approach, addiction is increasingly being understood through the lens of attachment. Her feature makes fascinating reading and will, I hope, be useful, given the increasing number of clients presenting for therapy in private practice who suffer greatly as a result of out-of-control behaviour of one sort or another.

Coming back to Crossing Continents, and to end on a more optimistic note, one of the people interviewed for the programme was Monique Arend, who, like Aurelia, has been diagnosed with psychiatric illness, and made many attempts to kill herself before finding a therapist who specialises in trauma, about whom she says: ‘She told me I’m not crazy, but I’m traumatised – that’s a big difference. We worked very hard together – it was very painful. But we went through it, and since then I’ve been on a recovery trip.’