My perspective
Depression: rethinking diagnosis and treatment
Darian Leader argues that depression is often a good sign in therapy

My perspective
What have antidepressants got to do with depression?
Diane Hammersley argues that drugs don’t treat depression but just remove symptoms

From the chair
Wendy Halsall: Wave of enthusiasm 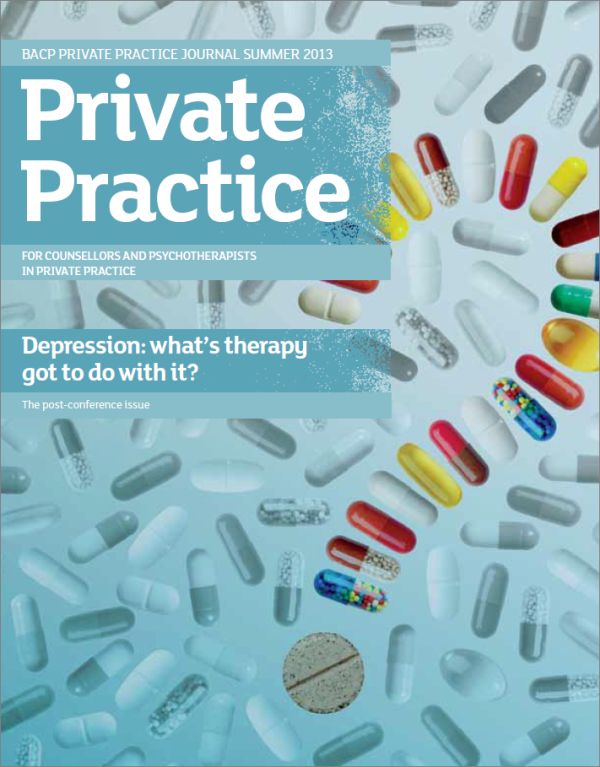 I had the good fortune to watch Katherine Welby, the daughter of the Archbishop of Canterbury, on BBC Breakfast News last month speaking eloquently about the battle she’s raged with depression since she was a teenager. Her description of living with low self-worth, panic attacks, suicidal feelings and the sorts of self-castigating beliefs that tell her it’s ‘ridiculous’ to be depressed in her position, were familiar to me from the stories clients have shared with me, as well as from times in my life when I have experienced similar thoughts and feelings myself. I suspect many of you could say the same.

Given the World Health Organization’s prediction that depression will be the second largest health problem in the West by 2020,1 we can anticipate a continued increase of referrals into private practice from people with depression. This is one reason why BACP Private Practice chose depression as the theme for its annual conference last February. This conference ‘special issue’ brings together articles by the keynote speakers, Darian Leader and Benjamin Fry, and five of the workshop presenters.

A shared theme running through various of the articles is the debate that continues between those who see depression as an illness that can be treated medically and those who see it as an inevitable reaction to the everyday sufferings of life. Katherine Welby describes a turning point in her life when she started to think of her depression ‘as an illness’ and sought medical help.

It is easy to understand why people in emotional pain who have a tendency to blame themselves for their suffering, and who additionally feel stigmatised by society, might find it a relief to be diagnosed with an illness. However, with limited resources to refer patients on for counselling and psychotherapy, GPs’ first line of defence against depression is often to medicate. The statistics are sobering: just under 46.7 million prescriptions for antidepressants were dispensed in England in 2011.2 But, as Diane Hammersley points out, analysis of all data about selective serotonin reuptake inhibitors (SSRIs) – the most commonly prescribed antidepressant in the UK – showed that only 25 per cent of people get better due to drug effect, no better than the recovery rate for those taking placebos.3

The debate is timely given the publication last month of the revised edition of the Diagnostic and Statistical Manual of Mental Disorders (DSM-V). In the 61 years since the publication of the first edition, the number of diagnostic categories has risen from 106 in 1952 to 374 today. Critics of the medicalisation of mental health like Darian Leader highlight that many of these newly diagnosed illnesses require treatment – usually with highly profitable drugs. It’s an important argument that’s also taken up by James Davies in his book Cracked: Why psychiatry is doing more harm than good, which was published in May and will be reviewed here in a future issue.

Wherever you sit on the debate, it seems clear that as counsellors and psychotherapists in private practice, we have a vital role to play in providing clients with an alternative to medication and the manualised, short-term therapeutic options currently available on the NHS.