Practice matters
Are you on the Register?
Sally Aldridge outlines different routes to joining the BACP Register of Counsellors and Psychotherapists

From the chair
James Rye: Why are we here? 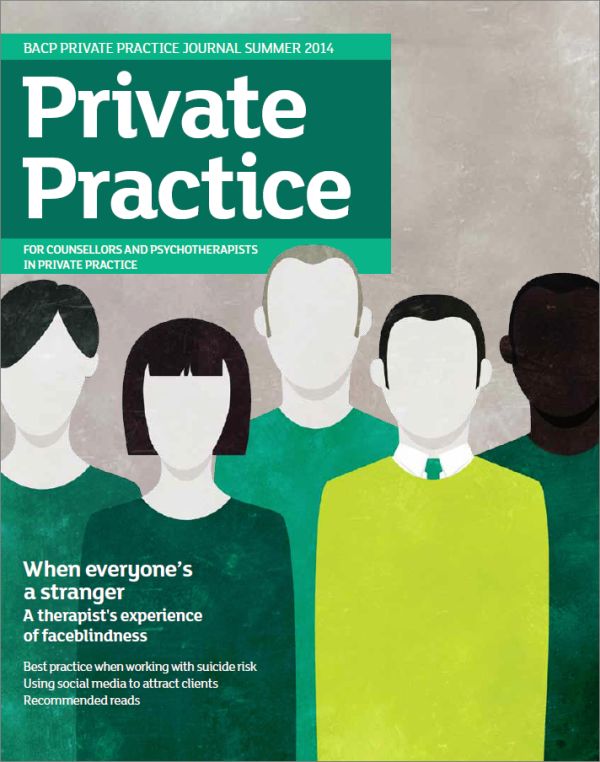 I’ve been thinking about how some people with life challenges draw strength and forge meaning from them. I was moved and inspired by a recent TED Talk by Andrew Solomon1 on how our struggles, the things we’re born to – our gender, our sexuality, our race, our disability – and some of the things that happen to us, make us who we are and unite us with others. ‘When we’re ashamed,’ Solomon says, ‘we can’t tell our stories and stories are the foundation of identity.’ One person who has found the courage to tell her story is Monica Zenonos, who writes this issue’s cover article ‘When everyone’s a stranger’.

Monica is one of the estimated two to three per cent of the total population who has prosopagnosia,2 more commonly known as faceblindness. A neurocognitive impairment like dyslexia, dyspraxia, Asperger’s and ADHD, and one of various visual agnosias, faceblindness impairs the ability to recognise faces. Celebrities including Brad Pitt, Duncan Bannatyne, Stephen Fry and Oliver Sacks have all recently ‘come out’ as faceblind – leading to an increase in people seeking support from counsellors and psychotherapists for the condition. When Monica was diagnosed as faceblind seven years ago, she found no specific support available, so decided to train as a therapist and set up the London Faceblind Group in 2011.

Like other neurocognitive impairments, because faceblindness is an invisible condition, Monica believes it’s essential for therapists to understand the emotional landscape of faceblind clients – many of whom may themselves be unaware they have the condition. By sharing her story, Monica makes meaning of her struggle and offers that meaning as a source of support to others. I think this reflects the universal impulse that drives the therapeutic endeavour and hope that, like me, you will be inspired by Monica’s story. Perhaps you might even be moved to share a story of your own.

On the note of reader involvement, I am grateful to those of you who took the time to complete our recent reader survey. It’s encouraging to hear that nine out of 10 of you say that the journal is useful and relevant to your practice. Of course, it’s impossible to please everyone, and I’m also grateful to those of you who responded critically to aspects of the journal you don’t like or find useful. Your suggestions for improvements have been noted and will prove helpful when we plan future issues.

One recurrent theme in your feedback was how you value opportunities to mitigate the isolation of private practice and feel more connected with a community of practitioners. It’s great to know some of you feel the journal helps to do that. Another aspect of the division’s activities, which has been designed specifically to help build support and community for private practitioners, are BACP Private Practice regional networking groups. Since launching late last year, 10 groups
have now been established across the country, with an additional four new groups holding inaugural meetings over the next few months and at least another three in the pipeline, which we will report on in the next issue and quarterly e-bulletin. These groups are self-sustaining, run with administrative and marketing support from the BACP Events department, and made possible by the generosity and goodwill of local volunteer coordinators.

One such coordinator, Zoë Veevers, shares her experience of setting up the Banbury regional networking group. We hope to include regular reports from other groups in future issues, and that questions of interest and concern identified by members attending groups across the country will in time feed back into these pages as a way to ensure the journal reflects the diversity of topics of relevance to you in your work.

Elsewhere in this issue, Martin Hogg provides expert advice on how social media can raise the profile of your business; Andrew Reeves offers guidance on managing suicide risk in private practice; Claire Thomas adds her voice to the debate about whether or not qualified counsellors should provide their services for free; and James Rye extols the benefits of technology for clients in accessing therapy. In addition, Judy Stafford reports on new BACP training modules available to support independent practitioners to engage with NHS commissioning and Sally Aldridge outlines the different routes towards joining the BACP Register of Counsellors and Psychotherapists – which for practising members wanting to continue in membership will become mandatory by 31 March 2016.

Finally, Julia Bueno invites 13 therapists to contribute their top three recommended reads for colleagues, supervisees and clients. If your favourites aren’t on the list, get in touch to let us know what they are so we can include further recommendations in future issues and in the members-only section of the BACP Private Practice website.