Debate
Has the pendulum swung too far?
Neville Tomlinson wonders whether the therapeutic relationship can survive the clamour for evidence-based practice

My perspective
The path with heart
John Rowan considers the role of assessment from a humanistic, existential, authentic, relational and transpersonal perspective 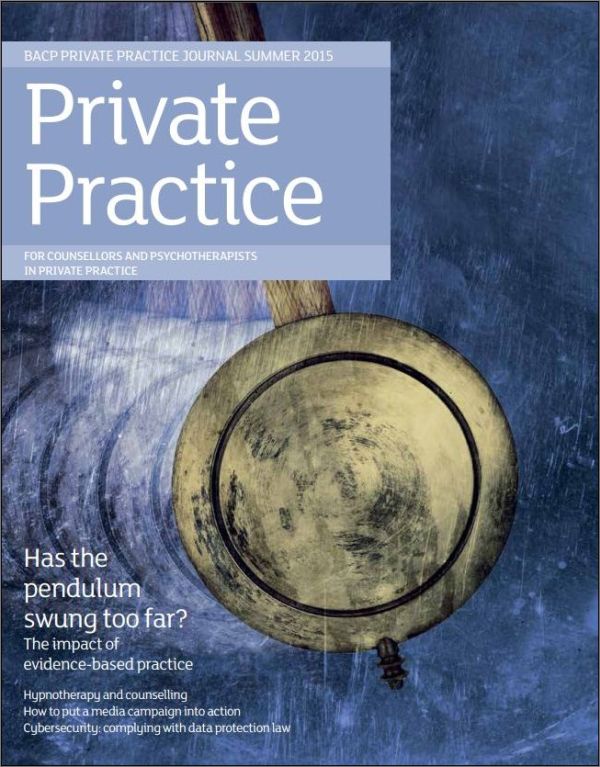 Despite government commitments on waiting times and promises of additional investment in therapy services, a staggering 94 per cent of over 2,000 therapists working across the NHS, the third sector and in private practice, report they regularly see clients who feel let down by the NHS.

The survey, jointly commissioned by UKCP and the British Psychoanalytic Council (BPC), also reports a 77 per cent increase in the number of clients with complex mental health conditions presenting in private practice, and concludes that the strain on publicly funded therapy services means that private practitioners are increasingly ‘picking up the pieces’ with individuals who have been failed by the NHS.

Although concerned by these statistics I am not shocked by them as they corroborate a trend I have noticed in my own practice over the last five years, and one I frequently hear others report. One result of the heavy emphasis placed on short-term solution-focused psychological therapies within the NHS is that long-term psychotherapeutic services in many parts of the country, where they exist at all, have been restricted such that wait times for clients with complex and potentially critical mental health needs are too long. Over half of the therapists who participated in the UKCP/BPC survey said such clients are either unable to get the type of help they need on the NHS (58 per cent) or the therapy offered is too short for their needs (63 per cent).

What has helped to create this situation, as Neville Tomlinson argues in our cover story, is the necessity, in order to access public funds, for psychological therapies to provide an evidence base. And the way in which, despite considerable debate and divergent opinion about how such evidence might best be established, the National Institute for Health and Care Excellence (NICE) – the gatekeeper to public funds – continues to be unequivocal: the gold standard of healthcare research is the randomised controlled trial (RCT). Without evidence of efficacy from such a trial, there can be no treatment recommendation from NICE.

Neville Tomlinson addresses important concerns about the reliability of RCTs, including researcher bias and the suggestion that the prevalence of CBT-based evidence is because, as a short-term solution-focused therapy, it is easier to test than other approaches, and many of its proponents are based in educational establishments supportive of and committed to research. The preoccupation with RCTs can also mean that case studies are unlikely to be considered and, as a result, it can be easy to forget that the research is gleaned from the life stories of our fellow humans.

The supremacy of the RCT is also worrying because talking therapies within the NHS are now being embedded within a biomedical model, which advocates diagnoses and standardised treatment methods or protocols, and which places the therapist in the role of expert. As we all know, many within our profession simply do not hold with this paradigm, and regard the practice of therapy as more of an art or a craft than a science. I think this fundamental split can be traced back to Descartes’s view of humans as dualistic creatures, his separation of mind from body, thought from feelings. In our rational, empirical age, head is valued above heart, intellect above intuition – because these are easier to measure scientifically.

What a relief then to read John Rowan’s article and be reminded that from a humanistic, existential, authentic, relational and transpersonal perspective (to which he assigns the apt acronym HEART), concepts of diagnosis, treatment and the therapist as expert are anathema. Indeed, he goes a stage further to argue that any kind of formal assessment is an impossibility for therapists working within these frames because, among other reasons, the client knows better what the problem is, and a client’s history is disclosed in the process of interaction between therapist and client and as such is co-constructed in the process of meeting.

As a result of the stresses of increasingly unmanageable caseloads and a lack of understanding of and recognition for the profession and the contribution that longer-term approaches can bring to the NHS, 72 per cent of therapists who participated in the UKCP/BPC survey are leaving the NHS in favour of private practice. This mass migration is perhaps reflected in the exponential growth of the BACP Private Practice division over the last two years, which has increased in size by 34 per cent, bringing the individual membership (to end April 2015) to 3,489.

If you are among one of these recent new members, welcome. I would like to invite you and all our readers to please get in touch to let me know your opinions about any of the issues discussed in these pages, or if you have any thoughts about working in private practice that you’d like to share. I will be very pleased to hear from you.