Ways of working
Being with what is
Kamila Hortynska on the benefits of mindfulness, regardless of a client’s presenting problem

My perspective
How does anxiety arise? A neurobiological perspective
Richard J Evans describes the biological and developmental factors that underlie anxiety

My perspective
Problems and principles, not disorders and techniques
Richard Hallam argues that adherence to the medical model is hampering the development of theory and practice in psychotherapy

My practice
Claire Thomas on paying attention to anxiety 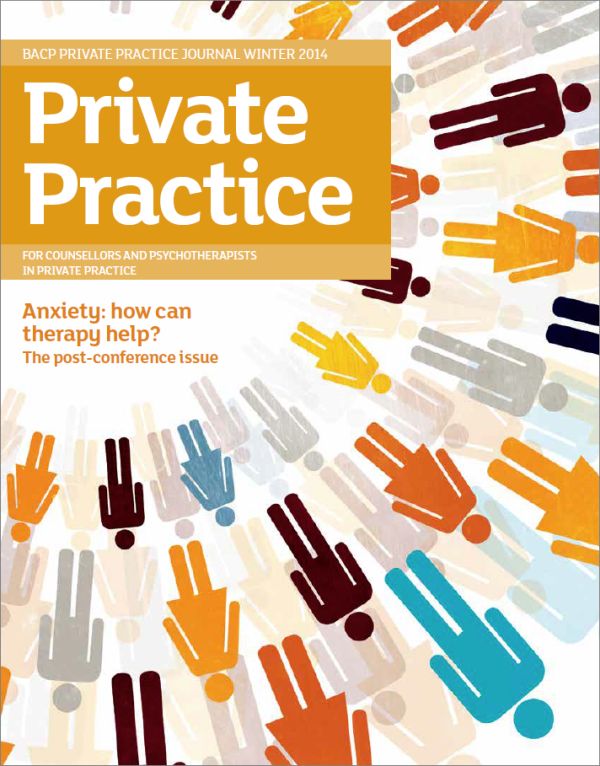 A record 233 people attended the annual BACP Private Practice conference on 13 September, making the event one of the largest divisional conferences BACP has ever held. Following on from last year’s successful conference on depression, the theme for 2014 was anxiety, and I’m very pleased to be publishing contributions from eight of the presenters on the day in this specially expanded post-conference issue of Private Practice.

In these pages the topic of anxiety is covered from a range of perspectives: from the biological and developmental factors that underlie anxiety, to the relationship between attachment and anxiety across the lifespan; and from the support that counsellors in private practice provide to people stressed in the workplace through employee assistance programmes, to different approaches to working with anxious clients, including emotion-focused therapy, brief solution-focused therapy and mindfulness.

Both of the conference keynote speakers, Richard Hallam and James Davies, write of their frustration with a medical model of mental health that reduces human experiences, like anxiety, to disorders, symptoms and treatments, and of the need for a plausible alternative. In my interview with him, Davies argues that as therapists we still defer too readily to the medical model, perhaps because we’re cowed by psychiatry’s aura of scientificity, its high status relative to therapy, and our fear of professional marginalisation if we stray too far from it. He also suggests diagnosis can mitigate our own anxiety as we sit before a person in need, ourselves in need of the assurance that we know what’s going on.

The only way Davies can see a reversal in the current situation occurring is if the influence of the pharmaceutical industry diminishes, which he writes will only happen if we open our eyes to how corrosive this influence has been, based as it is on the burying of negative clinical trials, the funding of the regulatory agencies and the financial co-opting of large sections of the psychiatric community who endorse and promote pharmacological treatments.

Richard Hallam argues that the medical model of mental health, with its operational definitions and standardised procedures, is seriously hampering the development of theory and practice in psychotherapy because it encourages top-down thinking, where the client is fitted to the theory, rather than the client’s circumstances being developed, bottom-up, into a theory about the client. Although this model has many benefits for those who fund and manage services – because of the drive to reduce costs and increase the predictability of operating procedures – Hallam is concerned it is leading to a narrowing in the training of therapists and the widespread adoption of treatment manuals.

Recognising that expertise matters to both clients and the wider critical public, Hallam writes of our need to develop alternative ways of conceptualising and measuring problems, which respect their uniqueness, and which can be made transparent to others and translated into a teachable form. His answer is to create an approach to therapy that’s guided by principles not techniques, and that creates a flexible, individually tailored and expert approach to problems. He argues that how we formulate a client’s problems contributes to success in the work with that client, and that a method of representing the process of assessment and formulation is needed that can be scrutinised in supervision and more widely.

Also in this issue, Robert Elliott writes about a relatively recent humanistic approach to counselling, emotion-focused therapy (EFT), that is proving successful for clients experiencing social anxiety, the third most common presenting problem in outpatient mental health settings after depression and substance misuse. This is an important development, as there is relatively little evidence for the use of humanistic therapies with anxiety, and what evidence there is favours CBT over the person-centred approach, out of which EFT has grown.

In addition, among other articles, Evan George writes about solution-focused brief therapy, an approach that ‘facilitates clients in building more satisfactory futures’; Kamila Hortynska explains why mindfulness is not like any other technique you can add to your toolbox, but something we ‘must be ourselves’, and practise being so, before introducing it to clients; and Richard J Evans writes that as therapists we should be interested in the evolutionary, genetic, neurobiological and psychophysiological backdrops to our work, arguing that they ultimately have the capacity to be powerfully explanatory and to influence prevention and treatment.

Many of the opinions expressed in this issue resonate with me and I believe are in tune with the thoughts of many others in our profession, and yet I despair sometimes at how wide the gap seems to be between what I feel to be true and the prevailing zeitgeist, in which the focus, in the statutory sector at least, continues to be on the provision of manualised, short-term, evidence-based treatments protocols for diagnosable mental health ‘disorders’.

I’d really like to hear your thoughts on these or any other opinions expressed or subjects covered in this issue. I’m always pleased by how many of you get in touch after each issue comes out, offering your services as a book reviewer, but I’d like to encourage more of you to think about sending in a letter responding to items in the journal you feel strongly about or, better still, contributing an article of your own.