Me and not-me (free article)
Lesley Finney on the ways in which eating disorders challenge the concept of the personal self as single, consistent and conscious 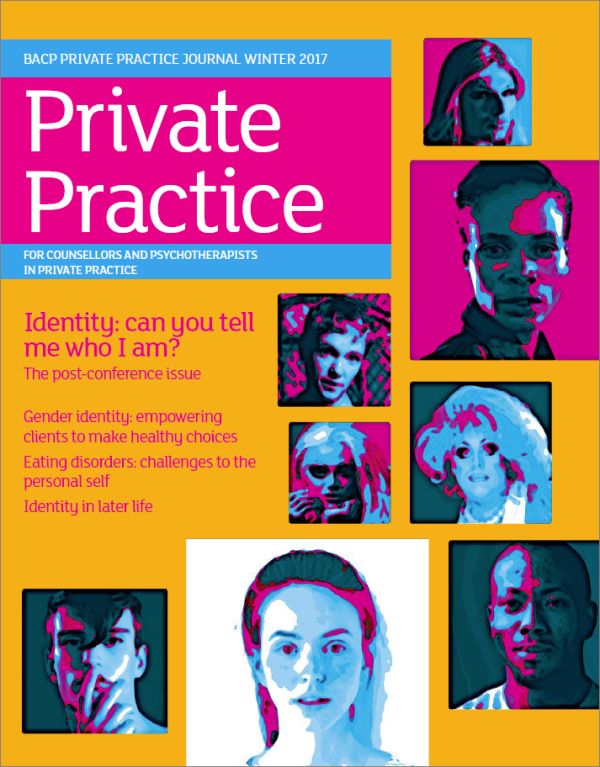 ‘I don’t know who I am.’ How often have you heard these words, or similar, spoken by clients within the confines of your consulting room? I have heard them many times, and spoken them myself to my own therapist in times of personal distress, often resulting from losses, endings, transitions, and periods of change and readjustment.

Far from being finite, as the simplicity of these definitions imply, however, identity is complex, multifaceted, always in a continuous and dynamic process of change, and socially constructed. We do not only have a psychological identity but we have social identities too, based on age, religion, nationality, ethnicity, race, social class, culture, disability, education, language, dialect, sex, gender identity, sexual orientation, generation, occupation, profession, political affiliation, veteran status etc.

Writing about the complexities of identity in an inspiring article on the Psychosynthesis Trust website,2 psychotherapist and trainer Angie Fee points out that in our therapy trainings we are made all too aware of the importance and significance of psychological identity – self-esteem, self-awareness, self-reflection – but perhaps may not have given the same amount of attention to how our social identities have developed within our own particular cultural context, and the conflicting nature of power some of these identities hold. ‘This process,’ she writes, ‘includes a deepening awareness of how systemic and institutionalised models such as racism and heteronormativity, have created privileged and oppressive social divisions. This can be a challenging and threatening process, particularly if we have normalised and internalised our own positions of power and privilege.’

On that note, I am pleased, therefore, to be introducing this special issue of Private Practice on the important theme of identity, which includes eight feature articles by some of the therapists who gave presentations at the 2017 BACP Private Practice conference, ‘Identity: can you tell me who I am?’ The conference theme was particularly prescient at this point in time in which the politics of identity are to the fore in the world in ways that are both progressive – the shift in the understanding of gender identity becoming more mainstream, for example – and, sadly, also divisive, as we see in the rise of white identity politics in the US and Europe.

Writing on the subject of how to support clients who are coming into therapy to explore their identity, Michelle Bridgman, one of two of the conference keynote speakers, argues the need for a paradigm shift in the way trans people are clinically treated. ‘The role of counselling and psychotherapy is not to encourage or discourage any course of action,’ Michelle writes. ‘If we meet our clients in a meaningful dialogue and accept them wherever they may be, they have the potential for a healing encounter that will increase their awareness and understanding, while at the same time empowering them to make healthy choices.’

And on the same topic, Debbie Clements, one of the conference workshop presenters, says that one of the key things she’s learned in her work supporting adults and young people around gender and sexuality is: ‘I cannot support clients around their gender identity if I subscribe to a traditional model of gender. I must support my clients to express all of who they are – their masculinity, femininity and androgyny, without judgment or restriction.’

Elsewhere in this issue, contributors focus on the impact that significant life transitions – such as the movement from midlife into old age – can have on our sense of identity, and the particular ways in which grief has a profound and destabilising affect on our ‘continuity of being’, leading to a redefinition of self and identity. Also included is a personal reflection by Brian Charlesworth on his difficult transition into living life as an ex-soldier in a civilian world, and a compelling feature by Lesley Finney  on the ways in which eating disorders challenge the concept of the personal self as single, ongoing, consistent and conscious.

And last, but by very far from being least, Kate Anthony brings us right back into the 21st century in her thoughtful contribution on the effect that technology is having on identity formation, and the vital importance that, as therapists, we must understand, engage with, and take very seriously this new reality. ‘When we dismiss cyberspace as somehow “not being real life”,’ she writes, ‘or shake our heads in despair at young people seemingly glued to their mobile phone, we miss the point that this is where identities are formed and sometimes damaged in the technologically connected world.’

Returning to the article by Angie Fee I cited earlier, she writes about how helpful she has found it is to apply an ‘intersectional approach’ when understanding the complexities of identity. Growing out of feminists of colour arguing that most feminist scholarship was from middle class/ white/educated women, the phrase ‘intersectionality’ was coined by American civil rights advocate Kimberle Crenshaw in 1989. Fee writes: ‘…intersectionality challenges one-size-fits-all stereotypes, adding to complexity, rather than reducing it. An intersectional perspective recognises that many of us fall between the cracks of heterosexual, black, class and spiritual discourses – we don’t just fit into one of those identities but they all interact with each other, bringing multiple dimensions to our experiences.’

This speaks to me, inspires me, and reminds me of Michelle Bridgman’s optimistic view that ‘the world now has space for a mosaic of gender identities’ – a concept we have attempted to replicate illustratively on the front cover. May the world also have space for an intersecting mosaic of every other identity too.