A therapist at sea
Therapist Juliet Rosenfeld describes her experience of bereavement as a widow and practitioner.

A portal to ethical practice
Andrew Reeves introduces the special issue on the Ethical Framework.

It really is that simple
Tim Bond explains the principles underpinning the main sections of the new Ethical Framework.

Keeping up with our clients
Comment from Jeanine Connor.

My work is my responsibility
Comment from Anne Stokes.

News feature: Does counselling make a difference? (free article)
Catherine Jackson asks whether the future is looking brighter for counselling within IAPT 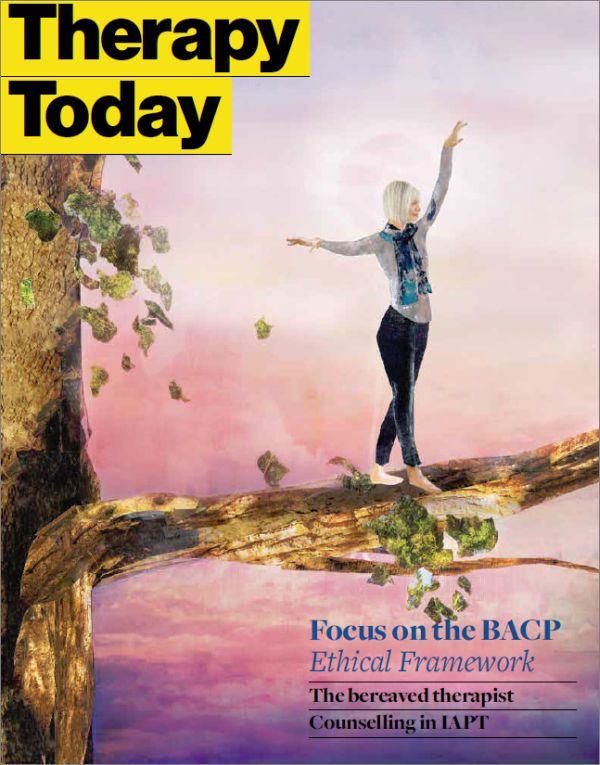 Editorial - What is ethical practice?

BACP Chair Andrew Reeves has already written the best opener to this editorial in his e-bulletin message to members on 1 July. ‘While the EU Referendum result has divided the country, one thing we can all agree on is the importance of providing safe and ethically accountable services to our clients. Putting the needs of the client at the centre of our work and ensuring we support ourselves in our practice seem, thankfully, to be a universal given.’

In this spirit, most of this month’s issue is given over to the new BACP Ethical Framework for the Counselling Professions, shepherded into print by Tim Bond, with extensive input from BACP members and other stakeholders. In his interview in this issue, Tim summarises the new Ethical Framework and its aims – to help any practitioner ‘examine the ethical basis of their work, articulate with confidence the good that they want to deliver and evaluate whether they have delivered it’. The Ethical Framework isn’t about telling BACP members the difference between right and wrong; it is about making explicit the high standards of ethical practice to which you are committed, both to set the bar and so that you can be called to account, by clients and by peers, should you fall short.

Counsellors are likely to be just as divided as the rest of the nation on the outcome of the EU Referendum. We received a few letters about the result, all from ‘remainers’. I decided to print Del Loewenthal’s alongside BACP’s own statement to members, because it raises a much wider question about ethical responsibilities beyond the individual client – a point also picked up by Ben Wrigley’s viewpoint on suicide prevention. Readers are, as always, very welcome to share their views, respectfully.

And speaking of respect, the news feature covers the historic tension between counselling and CBT within the IAPT programme. Vicki Palmer of Oasis Talk in Bristol offers some apposite words of wisdom: counsellors and CBT practitioners need to accord each other due respect as colleagues and fellow professionals. Indeed; to do otherwise would be a disservice to clients and to the profession itself.