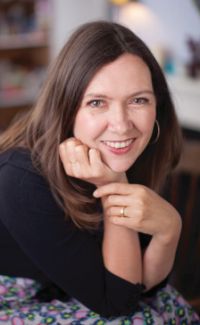 Joanna Briscoe is a journalist, broadcaster and novelist. She grew up in the West Country, and now lives in London. Her sixth novel, The Seduction, is published by Bloomsbury on 11 June.
www.joannabriscoe.com

Therapy more than changed my life; it’s been a vital component of my existence. I’ve had the privilege of being able to seek help both in times of crisis and in calmer periods when I’ve simply wanted to work something out with the guidance of an objective, trained professional.

I seem to be almost entirely unembarrassed about this, often merrily informing strangers, ‘I’m off to see my shrink.’ I do believe that, if you possibly can, being open about therapy is helpful to others. As far as I knew, therapists didn’t exist when I was growing up in rural Devon in the 1970s. Well, it turns out that the odd one did, but along with Indian and Chinese takeaways, tutors, good orthodontics or any of the standards of modern urban life, they simply weren’t visible in a time and place more marked by wild pony traffic jams and schools that tolerated illiteracy.

Escaping to London at the age of 18, I fell in with a – to me – glamorous crowd in which serial divorce, celebrity friendships and psychoanalysis were perfectly normal. By the age of 23, influenced by these new friends, I was fixed up with my first therapist, who saw me through serial weeping fits about my mother and, it turned out, kept half an eye on the newspapers because she actually believed my claim that I was going to be a writer. When it happened some years later, she wrote to me, and my memories of her good work came back. She was my ‘starter’ therapist – just right for the time; not too deep, a bit maternal and very kind. My father died when I was in my 20s and she helped me through that, as did a bereavement counsellor, who gave her services for free when I was wracked with guilt and grief.

I went for almost a decade without help and then, for the first and last time, I did the proper couch analysis stuff. She was Kleinian, strict and boundaried. Out poured my childhood in more detail. If that hadn’t been unpacked, aired and analysed, I don’t think I’d have become the halfway functioning adult I am. She helped me see the pattern of my somewhat extreme love life, to the point that I was genuinely no longer interested in repeating that pattern.

To me, it really does take someone else to spot, unearth and make you start to see those patterns themselves. Friends can certainly help, but friends are subjective and not paid to open up unpalatable truths. My friends have helped enormously over the years, but a well-trained, experienced professional can, over time, work magic – often subtle, and sometimes in the form of epiphanies.

I’ve also had an experience of therapy that was not so good and that sent me to yet another therapist to work on the damage it caused. I also have a friend who had an affair with their therapist, which did untold harm and inspired me to write about boundary-breaking in my new novel. Mercifully, such therapists are the exception.

I’m currently seeing – or Zoom conferencing in Covid-19 lockdown – a therapist who has kept me going through a difficult time, has calmly and safely helped and is my weekly prop, however much I don’t feel like it. We live in an age in which therapy is not a dirty secret.

If they can afford it or can manage the NHS waiting lists, I thoroughly recommend that everyone sees a therapist. It’s not navel gazing. It’s just a pretty wonderful feature of modern life. Nothing in his professional life as a grief specialist prepared David Kessler for the loss he experienced with the death of his son. Therapy Today, June 2020 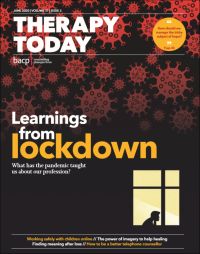