People
A question of soul: the importance of being in the therapeutic relationship (free article)
Mike Moss explores what connects client and therapist

Perspectives
Prayer
An excerpt from the book, Spirit in Session: Working with Your Client’s Spirituality (and Your Own) in Psychotherapy, by Russell Siler Jones

From the Chair
Finally, spirituality has come out of the closet!
Regular column from Maureen Slattery-March 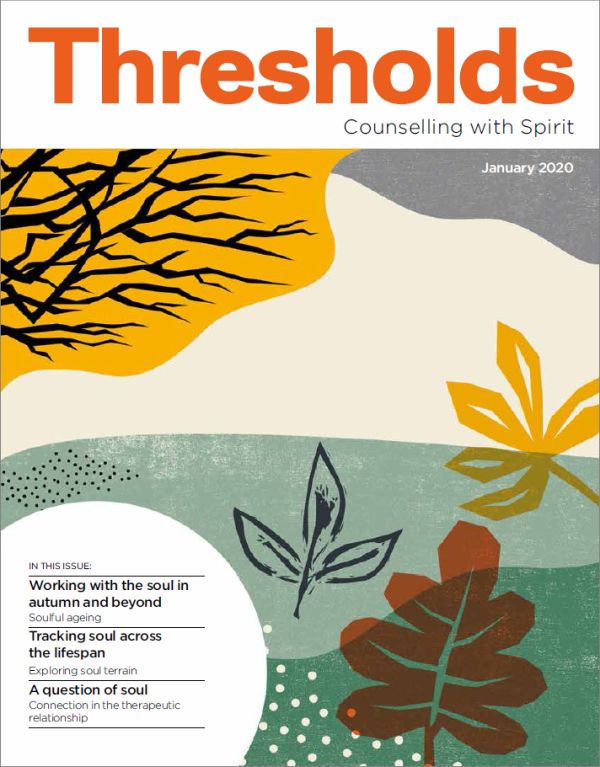 Divisional members and subscribers can download the pdf of this issue from the Thresholds archive.

From the editor: The importance of wonder

In this issue of Thresholds, we celebrate aspects of working with soul across the lifespan. Three of the speakers from the BACP Spirituality conference, held in Leicester in November 2019, have contributed articles on this topic. I would like to thank them for writing to very tight deadlines and being very generous with their time.

I was surprised by one episode in the new series of The Crown, which focuses on Prince Philip’s reaction to the moon landings in 1969 (no spoilers there, I hope).1 It made me reflect on how I often lose my sense of wonder during stressful times in my life. The episode features spacehoppers, and brings back funny memories of my siblings playing hockey while bouncing around on spacehoppers! Recently, I attended a one-day retreat on the topic of wonder at the Meditatio Centre in London, facilitated by Professor Mark Burrows. During the retreat, we were invited to watch a 10-minute video of birds in flight as a visual meditation; it was beautiful to spend time really observing and enjoying the patterns and rhythms in silence. As I get older, I need to find creative ways to rekindle the sense of wonder I had as a child growing up in Singapore.

In Japan, a person’s 60th birthday is seen as a new beginning. Hokusai, the Japanese artist famous for The Great Wave woodblock print, wrote about his attitude towards age:

‘…until the age of 70, nothing I drew was worthy of notice. At 73 years I was somewhat able to fathom the growth of plants and trees, and the structure of birds, animals, insects and fish. Thus when I reach 80 years, I hope to have made increasing progress, and at 90 to see further into the underlying principles of things, so that at 100 years I will have achieved a divine state in my art, and at 110, every dot and every stroke will be as though alive. Those of you who live long enough, bear witness that these words of mine are not false.’2

Alas, Hokusai didn’t live to be 110, but one of his final images is of a dragon ascending a mountain. It seems to be alive, to me.

I will be leaving the role of editor of Thresholds in early February 2020 to do some work with older people and I hope to set up in private practice. I would like to thank Maureen Slattery-Marsh for her support during my time as editor, along with the other members of the Executive Committee. Former Chair, Melody Cranbourne-Rosser, has also been a great support, and I remember my first meeting with Melody in 2014, when she was Chair of the Exec, at Pontyclun station, when we were both attending a meeting of the South Wales BACP Spirituality Network group. Jacqui Gray, Managing Editor of the divisional journals at BACP, has guided me skilfully through the editorial processes and I appreciate her patience and guidance. I have enjoyed meeting attendees at BACP events and would like to thank all the authors who have written for Thresholds during my time as editor. I wish everyone a Happy New Year and a wonderful 2020.