Special focus: Tears from the void (free article)
Cemil Egeli has an autoethnographic conversation about a night at the theatre

Research: Being human
Kate Binnie explores working with the breath in psycho-spiritual care in end-of-life settings

People: Invitation to the garden
Joanna Tulloch shares her experience of writing poetry for mental wellbeing 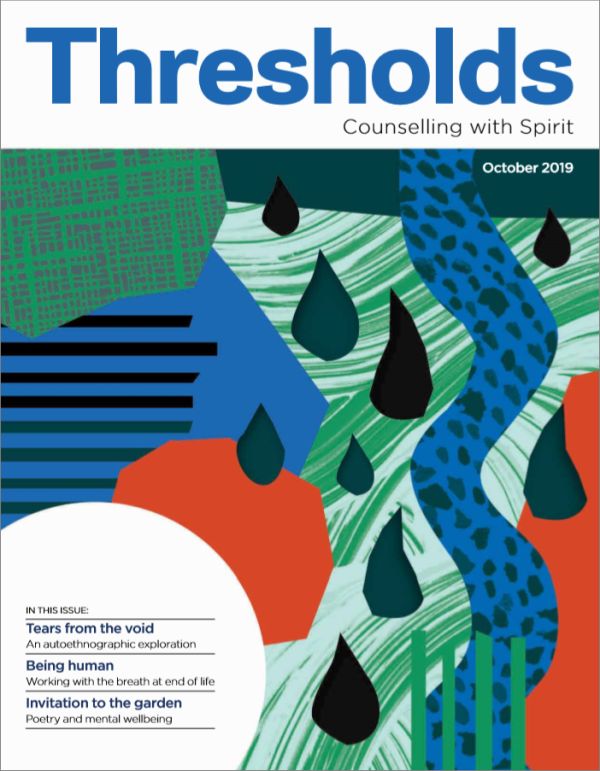 Divisional members and subscribers can download a pdf of this issue from the Thresholds archive.

From the editor: Living on the edge

Studying to become a counsellor, psychotherapist or coach involves a lot of reflective practice. When I was writing my dissertation, I found inspiration and challenge in a book written by the psychotherapist Robert Romanyshyn, The Wounded Researcher: research with soul in mind.1 In a paper with a similar title, he describes the edgy world of psychology:

‘I often describe psychology as an edgy discipline whose mode of knowing is lived and practiced at the margins of consciousness where one is addressed not only by something other, like a dream, but also by the otherness of that other. At the edge one has to learn to think differently. One has to learn to think outside the box of either/or dichotomies. One has to learn how to be able to tolerate waiting in the midst of ambiguity where the fabric of psychological life is woven between reason and dream, where the patterns and figures that clothe the psyche appear in symbolic guise whose presence is ill suited in the garments of facts and ideas.’2

During my psychotherapy studies, I would have benefitted from learning more about autoethnography, which is described as ‘a methodological chat with self’ by Cemil Egeli.3 Cemil has written this issue’s special focus article, using an autoethnographical style. He shares his experience of a night at the theatre and explores how the experience affected him and reminded him of the loss of important relationships in his life.