This guidance was funded and steered by BACP, British Psychological Society (BPS) and United Kingdom Council for Psychotherapy (UKCP), in conjunction with the APPG for Prescribed Drug Dependence Secretariat (all members of the Council for Evidence-based Psychiatry (CEP)), and the National Survivor User Network (NSUN).

It is endorsed by the main non-modality specific professional bodies, including the National Counselling Society (NCS), for use by their members and relevant training organisations

The aims of the guidance are to:

Drugs have been the mainstay of psychiatric treatments since the 1950s. It is assumed that the major types of drug used in psychiatry work to reverse, or partially reverse, underlying disease progress in a 'disease-centred’ model. This guidance finds little evidence to support this model of drug action.

Where psychiatric drugs produce helpful effects, they are best thought of as a temporary tool or coping mechanism that can be a precursor to psychological change

The guidance aims to demystify legal and ethical concerns that therapists may have. For example, it establishes the difference between giving medical information and giving medical advice and is clear about the ethical considerations involved. This is a deliberate attempt to broaden therapists' perceptions of what lies within their competence by providing relevant evidence and information. 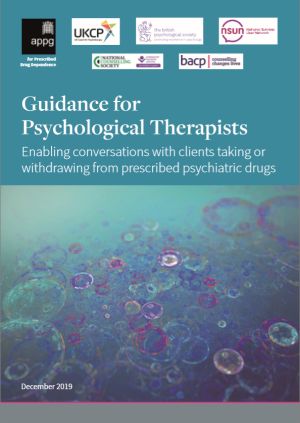 Results of a survey of BACP, UKCP and BPS members are now available online

Q1 What’s the purpose of the guidance?

Public Health England’s report published in September described a steep rise in prescriptions (which have broadly doubled in the last 20 years) which means that most psychological therapists now work with clients who have either taken or are taking or withdrawing from psychiatric drugs. However there has been a lack of summarised evidence, information and training about the impact of these drugs on clients and on therapy itself, and this constitutes a growing problem whatever the modality or therapeutic setting. The guidance aims to provide evidence based information that will empower and support conversations often already taking place between psychological therapists and their clients within the frame of therapy. Therapists will need to decide for themselves whether, and to what extent, they wish to use this information.

Q2 Why is this important?

The recent survey of 1,200 practising therapists revealed that the majority felt ill-equipped to manage such issues in the therapeutic setting, with 93.1% reporting they would find it ‘useful’ or ‘very useful’ to have guidance to help them work more confidently with people either taking or withdrawing from psychiatric drugs. By supporting the creation of this guidance, the endorsing bodies are taking responsibility for offering support to their members on the front line.

An example of the kind of information provided is that current evidence shows that 50% of all patients withdrawing from antidepressants will experience withdrawal effects, with 25% describing these as ‘severe’. If such experiences aren’t recognised as being possible withdrawal effects, drugs can be mistakenly reinstated on the assumption that an original problem has returned. It is believed this may be contributing to the increased time people are now taking such drugs. If a therapist is aware of the possibility of withdrawal effects, not just when someone stops taking them but even if they miss a dose, they may have the opportunity of flagging this to a client who can then discuss it with their prescriber.

Psychological therapists are also potentially well placed to support a client who decides, with their prescriber, to withdraw from their drugs.

Q3 Which drugs does the guidance cover?

It does not tackle prescribed painkiller/opioid use or any illicit or recreational drug use and any associated problems. Naturally, such hard and fast distinctions may belie clinical complexity, given some clients may present with multiple prescribed and non-prescribed dependencies.

Q4 What position does the guidance take on prescribed psychiatric drugs?

While this guidance advocates the importance of informed client choice based on full information about potential benefits and risks, it does not advocate psychological therapists telling their clients to take, not take, stay on or withdraw from psychiatric drugs. These matters should be left to the prescriber and client to decide. This guidance is not making the case that psychological therapy should always be used alone without drugs or that drugs should never be used - there are times when they are helpful.

Q5 What’s the relationship of the organisations involved in the creation of this guidance?

In the last parliament the All-Party Parliamentary Group (APPG) for Prescribed Drug Dependence facilitated the creation of this guidance by bringing together key professional bodies representing psychological therapists in the UK with key practitioners and academics.

The British Association for Counselling and Psychotherapy (BACP), British Psychological Society (BPS) and United Kingdom Council for Psychotherapy (UKCP) have collectively funded and steered the creation of the guidance in conjunction with members of the APPG for Prescribed Drug Dependence Secretariat (all members of the Council for Evidence-based Psychiatry (CEP)), and the National Survivor User Network (NSUN). The above professional bodies, including in addition the National Counselling Society (NCS), endorse the guidance and will promote it to their members and relevant training organisations.

A team of leading practitioners and academics, many of whom are members of both the professional bodies and CEP, has authored the document. CEP and its members are the copyright owners and will update the content, which will be freely distributed under a Creative Commons licence which allows users to copy and redistribute the work.

The guidance has been developed in conjunction with and reviewed by experts by experience (clients, carers, therapists and campaigners).

The APPG is distributing the guidance and hosting a website for this purpose, seeking to make it as widely available as possible both in the UK and, where appropriate, internationally.

Q6 Why are only BACP, UKCP, BPS and NCS involved?

The APPG for PDD’s aim was to reach as many psychological therapists as possible and so approached the four largest non-modality specific organisations that between them have 80,000+ members.

Q7 The guidance is quite long – will there be a shorter read version available?

Yes - a shorter read version and other training materials will be developed over the coming months. These will be released as they become available.

Q8 Will the guidance cover working with children and families?

The guidance initially covers working with individual adults. The parameters of a project must be drawn somewhere, and ours reflect pragmatic constraints rather than any implied grading of the relative importance of the topics omitted.

Q9 Why is this guidance just for psychological therapists? Will there be any for other professional groups?

It is clear from PHE’s report that more services are needed to support people effected by prescribed drug dependence, and it is hoped that other professional groups will consider what additional guidance they might develop for their members. After the election the APPG for PDD secretariat would be pleased to talk to any such group interested in developing their own guidance.

Got another query not covered here? Please contact us.