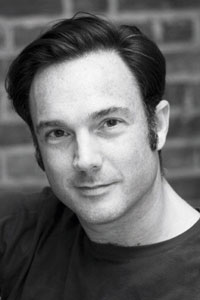 When I reflect on the theme of creativity in therapy, my immediate thought is that the therapeutic process is a creative act in itself. Turning to a dictionary for definitions, to be ‘creative’ is to produce or use ‘original and unusual ideas’,1, and to ‘create’ is to ‘to make something new.2 Each therapeutic encounter then offers a clean slate and the potential for something new to emerge. And through the vessel of the therapeutic relationship, the possibility for newness – the forming of new self-concepts to replace old, outworn ones, for example – results from an act of co-creation, with the unique and ever-evolving interrelationship between therapist and client providing the catalytic converter through which something new can come into being.

When we work, as we do, with what is unconscious (by definition as yet unknown) as much as (if not more than) with what is conscious, it’s clear the term ‘talking therapy’ is a misnomer, because we never use just the language of speech when we converse with clients. We’re always tuning in to the language of the body, the language of feelings – for which words frequently prove inadequate – and the language of what we might call ‘spirit’ or ‘soul’; that sense we can all tap into, whatever our religious beliefs or non-beliefs, that connects us to a sense of something greater than our separate, individual selves.

When I think then of the prescriptive, manualised protocols that prevail in statutory mental health provision – the procedures that therapists are required to follow according to whatever ‘clinical’ pathway the ‘patient’ is deemed to be on – I fear that something crucial may risk getting lost as we reduce therapy, in a quasi-scientific way, to a series of scripted interventions that terminate with outcome measurements; as if these data can ever be anything other than subjective and empirically unreliable.

That’s not to say that within the frame of time-limited work, interventions of this sort do not have a validity – they do – but this should not be at the expense of providing space and time for something new and unexpected to happen in the therapy room. Or at the cost of the therapist being free to meet the client where they’re at; or being able to listen carefully to what they want and need from us (understanding that this involves listening as much to unconscious as conscious communications, and that the unconscious works in its own timeframe), and relating to them from a position of equality rather than power, as a fellow-explorer rather than expert.

I’m writing this having seen that the draft consultation for NICE guidance on the treatment and management of depression in adults is underway.

Encouragingly, it states that people with depression ‘…should make the choice on what treatment option is right for them, in discussion with their healthcare professional’, with a focus on ‘…patient choice, and the organisation of, and access to, mental health services’; for example, ‘…cognitive behavioural therapy (CBT), exercise, counselling or psychotherapy’.3

What remains unclear is how the patient’s choice is to be funded and delivered, should that be to access the full range of therapeutic services on offer, say, by BACP members. To return to the theme of creativity, this issue includes contributions from all the presenters who participated in the BACP Private Practice Conference, ‘When words are not enough: using creative approaches in therapy’, in September. I hope it might inspire you to reflect on the ways in which you are already working creatively with your clients. Pauline Andrew explains how nesting dolls can help clients explore their inner depths and connect with their core self. Private Practice, December 2021 Ariane Agostini on how we can learn to listen to the body and understand its expression. Private Practice, December 2021 When a raspberry jelly is a truth teller Listening with the third ear Christine Dunkley on the use of visual metaphors and physical props in therapy. Private Practice, December 2021 Thinking outside the box

Natasha Page on using cards to help clients identify the themes they wish to work on. Private Practice, December 2021 The washing machine of the mind

BACP news
Catch up with the latest BACP news and resources

Imperfect therapist
Competition: "All those years of therapy and all I have is the awareness that I’m making myself miserable" "Not everyone can express themselves through words alone, and creativity can tap into powerful emotions and experiences."

From the Chair, Rima Sidhpara

"Whether we like it or not, most of us tend to speak a version of psychobabble in supervision"

"Relational therapy is largely the skill of sitting with two truths and holding them both as true, even when they appear to be contradictory" 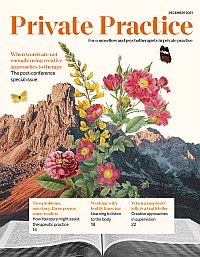