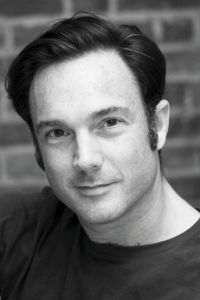 The front cover image is of the African American essayist, playwright, novelist and voice of the American civil rights movement, James Baldwin. The accompanying quote is from an interview he gave in 1962.1 They speak to the reality that a half century on from the struggle for social justice for black Americans to gain equal rights under US law,
even now, in 2020, as Anthea Benjamin writes in our cover feature, the black, Asian and minority ethnic (BAME) community encounter the same marginalisation and discrimination as they did in Baldwin’s lifetime.

The killing of George Floyd in Minneapolis on May 25, 2020, and the protests across the world that resulted from it in the name of #BlackLivesMatter, a movement whose mission it is to eradicate white supremacy and intervene in violence inflicted on black communities globally, have once again ignited the impetus for change, calling to white people to educate themselves and address their privilege. This, of course – and perhaps most crucially, given our important role as agents of social change – includes a willingness for us all, as counsellors and psychotherapists, to face difficult and uncomfortable conversations about race, and to explore the power dynamics that affect us all. As Anthea writes: ‘These conversations require us to be resilient and humble about getting things wrong, misunderstanding each other, yet willing to try again, and again and again.’

Anthea is a black woman and experienced psychotherapist, trainer, supervisor, group analyst and organisational consultant, so it is an issue of concern that she writes that, when she has attempted to open up conversation about racism and white privilege in various professional settings, she has ‘...felt a big push of projections’ back into her, and been perceived as having a chip on her shoulder. ‘This dynamic,’ she writes, ‘…leaves members of the BAME community feeling there is no point trying to communicate their experience, and the difficulty goes underground.’

Writing movingly of her own experiences of racialised trauma, Anthea argues passionately for the need for the counselling and psychotherapy profession – its training organisations and professional bodies, and for each and every one of us on an individual basis – to improve the ways in which we integrate anti-racist practice. Otherwise, as she writes, ‘…this dynamic gets re-enacted within the privatised clinical space with clients when practitioners have not been able to do the deep investigative work of addressing their own relationship with real-world privilege and power’.

Anthea has written an open letter2 to the therapy community, asking members to stand with her to create change. I would urge you all to read it, while also considering the questions she raises in her article. What does this mean for you in your work? What next steps could you take?

She also reflects on the timing of the outpouring of mass protests following the horrific, heinous events in Minneapolis, amid the COVID-19 pandemic, which has, as she writes, ‘…brought the world to a standstill and plunged all of us into a shared experience of powerlessness and vulnerability’. She wonders if the ‘…illusory shared experience of an outside threat, a virus “other”, lowered the defences between our differences’. ‘Whatever the process,’ she concludes, ‘…it seems that the painful experience of being black in a racialised world could be taken in, could penetrate and be met with compassion and rage about the repetitive, unjust horror experienced by black people’. Woke: emerging from the dream

Open article: The impetus for change is calling to white people to educate themselves and understand and address their privilege. Private Practice, September 2020 Eccentricity: how to be an oddball

Polly Plowman and Keith Silvester on how eccentrics have been at the heart of society for millennia. Private Practice, September 2020 To Zoom and back

Jayne Hayle on working online during the pandemic, and what to consider when returning to seeing clients face to face. Private Practice, September 2020 Locked down, but not out

Jude Adcock argues that we are living in and witnessing the advent of a new therapeutic era. Private Practice, September 2020 Psychiatrist Joanna Moncrieff tells Catherine Jackson why she doesn’t think antidepressants help, and why people need to come off them. Private Practice, September 2020 Tools of the trade

Caz Binstead on what to expect from the BACP Private practice toolkit. Private Practice, September 2020

BACP news
Catch up with the latest BACP news and resources

Imperfect therapist
A distanced walk: "At one point, she asks if we can sit down on a bench. I watch her take a seat, apparently unconcerned by the lack of disinfectant wipes."

"Why am I boring you with a story about an oven? Well, to me, it’s symbolic."

From the Chair, Lesley Ludlow

Accepting that we are animals

A chance to rethink 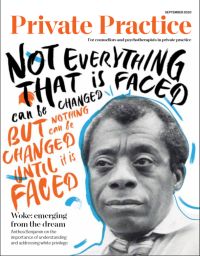