Not long after lockdown started, Jessica Salfia, a writer from West Virginia, circulated a poem titled The first line of emails I’ve received while quarantining on social media.1 ‘In these uncertain times,’ it started, ‘as we navigate the new normal’. It captured the quick turn towards platitude. For me, it laid bare the fact that, when faced with this stark and enduring reminder of impermanence, I am struck dumb.

In Andrew Smith’s article, Beyond words, he explains that he incorporated collage into his therapeutic practice after discovering that this medium opened up places for which ‘…he could not form words in his head’. And, if this idea intrigues you, there is a simple spiritual compass exercise with which to experiment.

This issue of the journal feels like something of a collage of perspectives on a crisis. The articles that reflect on the pandemic are laced with images: Alistair Ross’s hall of mirrors, Kate Fraser-Medcalf’s footholds. Robin Shohet suggests that the virus itself might be approached as a metaphor.

In her research into the dreams that counsellors have about their clients, Naomi England discovered that dream material can be another valuable source of non-verbal information about the therapeutic relationship that may not otherwise be accessible.

Indeed, there is something about image that kicks in when words can’t or won’t. We see this so often in therapeutic work: when a person is unable to express the depth of their anguish or rage, it may appear as an image. Sometimes, this image will be revisited, session after session, and evolve with the inner landscape.

As this journal was being finalised, I became a new kind of dumbstruck at the killing of George Floyd and the global protests against racism. I came to the realisation that, this time, I did not have the words, not because systemic prejudice came as a shock, but because it didn’t. The images and experiential practices in this journal are useful tools in therapeutic work but when it comes to inequality, open and honest discussion matters. Susan Cousins talks about seeking a safe place to discuss her experiences of racism, and the subsequent loss of faith she experienced after feeling she had not been heard.

At the meeting of the East Midlands Spirituality Network last month, people with diverse faiths and spiritualities met for the first time to talk about working from a spiritual perspective. We also explored some of the reasons why it can be difficult to talk about beliefs, as counsellors. I hope that the pages of Thresholds continue to be a place where we can share differences and common ground. Please do email thresholds.editorial@bacp.co.uk with your views and article ideas. No life has ever been saved Bereavement counsellor, Clare Green, reflects on the impact a pandemic could have on grief and the way we think about death. Thresholds, July 2020 Who’s in the mirror?

..."We will acknowledge the times when our resources were threadbare, stitches dropped, holes formed. Yet, the mesh of our lives will have been knitted together, stronger I hope, with new threads of resilience"

As counsellors we share an intimate space with our client, listening intently to their words and entering their world (with one foot at least!), so it is not unexpected that we might dream of them occasionally

The client of your dreams, Naomi England 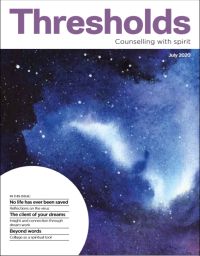