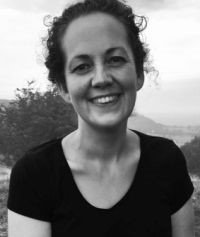 The 1955 tool might be rudimentary, but it works. This is what we always seem to be working with. What we know. What we don’t know. What we think we know. About ourselves. About others. Over and over again. In therapy and in life.

I think that this is what Sabnum Dharamsi is getting to the heart of in her tender exploration of a person’s tears in therapy. She talks about what it means to display emotions, without accompanying words. And she also talks about what it means to know one’s self or another, through a particular cultural and religious lens. And how this plays out at a societal level.

In a beautiful echo, Maureen Slattery-Marsh looks at the world through the lenses of Gandhi’s glasses. Both writers take a fresh and frank look at intersectionality.

Beverley Costa invites us to consider how a multilingual person might come to access different selves through the languages that they speak.

This issue also features a special focus on chronic illness because, in the depths of a pandemic, people who have become used to living with change and uncertainty, sometimes for many years, have a lot to teach us about how to approach a shifting sense of who we know ourselves to be.

The new debate section in this issue is my invitation to share yourselves on these pages. Paul Hurst’s reflections on the future of NHS chaplaincy are important and would also benefit from being run through the Johari window. Should those working in pastoral care be visibly of a certain faith? Does this come up against the hidden self of the other when it is not of that same faith? This debate is wide open: bring whichever Johari window you wish to the debate. But do join in. Email your thoughts to: thresholds.editorial@bacp.co.uk and we will share them in the next issue. Open article: Karin Blak tells the story of James Joyce’s daughter and considers the impact psychiatry has on a person’s soul .Thresholds, October 2020

Tim Roberts talks about the power of contemplative practice and presence in living with chronic illness. Thresholds, October 2020 Listening to the body’s wisdom Waiting for Godot and wondering about everything

Alistair Ross reflects on facing the loss of a friend. Thresholds, October 2020

Debate
What should pastoral care look like in the 21st century?
Paul Hurst asks readers to consider the modern needs of multi-faith chaplaincy

What do you see?

"It’s very uncomfortable for people when it feels stuck, and when there are blocks, because we naturally try to get rid of them. We want to go somewhere or there’s an urgent need for healing or something feels desperate. Something new comes from that eventually. You just have to wait and then something comes that you could not have predicted or expected. You find a little green patch to stand on where it has all been dark." 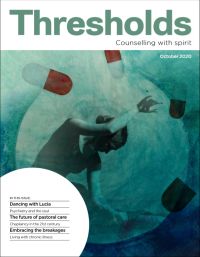