Who am I now?
Diane Aronson on sense of self after a brain injury

Losing my baby: losing part of myself
Jo Naylor on the impact on parents of the death of a baby at birth or within the first weeks of life

Suicide: objectivity and subjectivity
Andy Williams reflects on the loss of a client from suicide

From the chair
Mervyn Wynne Jones: Passing the baton

Supervision
Jim Holloway: What comes up 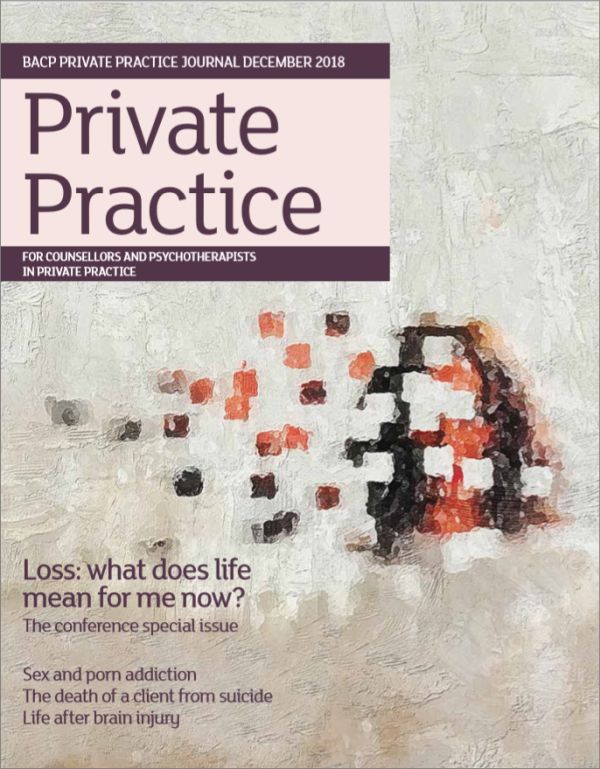 As therapists, in one way or another, we are always working with loss – our own and our clients’. The loss that accompanies the death of a loved one, the breakup of a relationship, the ending of a job, a role or career, the transition between different life stages. Some of these losses are sudden. Some anticipated. Some may cause a crisis of identity. All are followed, to differing degrees and with varying outcomes, by periods of grief and mourning, and each loss inevitably brings us face to face with profound issues of life, death and mortality.

Loss was the topic of this year’s BACP Private Practice conference and in this special issue of Private Practice you will find feature articles by eight of the workshop presenters, on a range of topics relating in varied ways to the theme of loss, and both keynote speakers. What shines through for me as a consistent message running throughout the articles is the healing power that talking and, crucially, being heard and attended to with care and compassion, can have when coming to terms with loss.

In his keynote speech, Jonny Benjamin describes how his world ‘came crashing down’ when he was diagnosed with schizo-affective disorder in his early 20s and talks about the moment he was on the edge of Waterloo Bridge, planning to jump, when a stranger approached him and began a conversation. ‘It was very different to my experience in hospital,’ he says, ‘where, when I said I felt suicidal, they would say, “We need to up your medication and you need to go back to the suicide ward.” I hated going to the suicide ward. Someone comes and watches you 24/7 and they don’t talk. They just sit and watch. There was never an opportunity for someone to listen like this guy listened. He was patient and eventually I began to talk.’

It was talking, initially through the medium of videos he made of himself about his mental health and posted on YouTube, which began the slow process of acceptance of his diagnosis. Six years to the day of that meeting on the bridge, to raise awareness of mental health and suicide, Jonny launched a social media campaign with Rethink Mental Illness to find the stranger on the bridge. Now, through the charity they have established to continue their awareness raising, both men run mental health workshops in education and workplace settings.

Jonny’s capacity to make meaning and creative use out of his loss – notwithstanding the ongoing relapses in mental health he continues to experience – is sadly not the case for all. Nine years after the suicide of a client he worked with in his private practice, Andy Williams reflects upon the deep impact on him of his death, and the process he’s undertaken over many years to piece together the facts of the case and gain some understanding of the psychodynamics that led to it. He draws some vital learning we can all benefit from about assessing risk when working with suicide.

As we all know, the impact on those grieving the loss of a loved one to suicide is devastating and among some of the more complex presentations of grief we work with in private practice. Another is disenfranchised grief, and Silva Neves presents two cases of working with clients experiencing complicated grief as a result of discovering secrets about their loved ones following the death. A female client who, following her father’s death, discovered child pornography in his home, is besieged by questions that can never be answered. A male client, who thought he was in a monogamous marriage, has to come to terms with the unexpected death of his young, healthy husband, as a result of secret chemsex hook-ups he engaged in when away on business. Both clients have to work through multiple layers of feelings about the betrayal, not being able to ask the betrayer questions, and the unfairness of life and death.

Working with people who are bereaved, whatever form the loss takes, requires self-care on the part of the practitioner to mitigate the risk of overwhelm and burnout. Andy Langford, Chief Operating Officer for Cruse Bereavement Care, writes about the vital importance of self-compassion in our work, a theme that is echoed by keynote speaker Julia Samuel, who reminds us that, as counsellors who see our bereaved clients just once or maybe twice a week for 50 minutes, it is crucial we remember we are only one small part of their ‘recovery environment’. ‘When someone comes through your door,’ she says, ‘what are the signs that this person is likely to be more vulnerable than somebody else? What does this particular death, for this particular individual, at this particular time in their life, living in this community, in these circumstances, mean?’

Also in this issue, Director of the Bereavement Service at York St John University Counselling and Mental Health Clinic, John Wilson, reviews the accepted theories on working with grief, and some new developments based on his own PhD research; Diane Aronson writes about the loss of the sense of self after brain injury; Jo Naylor writes about working with clients grieving the death of a baby at birth or within the first weeks of life; Michael O’Rourke writes about the daily conversations he has with clients who are approaching the end of their lives; and Paula Hall describes how addictive behaviour in all its forms is often used as a way to cope with loss.

I close with the following words from Julia Samuel, which reaffirm my faith in therapeutic work: ‘From my experiences with clients, it’s the thing that people do to avoid the pain that does them harm… It’s a paradox because the truth is that, if they allow themselves to feel the pain, incrementally, for a moment, it forces their system to adjust to this new reality. Pain is what heals you.’