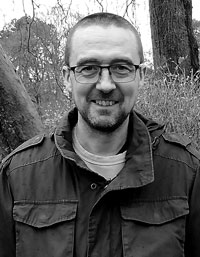 Keith Duckett is a BACP accredited counsellor, locum healthcare chaplain and Church of England priest. He is Lead Counsellor/Team Leader of Bereavement Support within Walsall NHS Palliative Care. His has degrees in social science and theology/religious studies; a Postgraduate Diploma in Psychotherapeutic Counselling and a master’s degree in pastoral care and counselling. Keith is an Executive Committee member of BACP Spirituality.

I can trace the development of the spiritual part of my reflective practice model right back to the start of my career as a healthcare chaplain at Sandwell Hospital, West Bromwich, in 2003. My job description included ‘…assist in meeting the spiritual needs of all stakeholders’ (ie patients, visitors, staff, volunteers and students).

As I was technically an Anglican (Church of England) chaplain, I quickly felt that I needed to clarify a practical understanding of ‘spirituality’ and ‘spiritual needs’ for those who were not Anglican, Christian or even religious. What could it mean for an Anglican chaplain to help meet the spiritual needs of potentially anyone? The heart of Anglican practice is to have concern and provide care for all those within the geographical patch or institution to which the practitioner is licensed. However, this remit seemed to imply something more than just providing a distinctly Anglican-flavoured care. It felt like, and was often described as, a form of person-centred care for all (while simultaneously being the specialist practitioner for those wanting something specifically Anglican shaped).

I stumbled across a way of meeting this ‘both/and’ issue in Alister McGrath’s 1999 book, Christian Spirituality: an introduction. From his thoughts, I got the general idea that a person’s spirituality can be seen as that which brings them to life or animates them (in all senses, from oxygen to opera music, or whatever the latter equivalent may be in each individual case). For those needing or wanting to think  about this and act on it from an orthodox Christian point of view, one can operate on the basis that it is the Holy Spirit, among us and within us, who gives and sustains life. For others for whom this is not relevant, we can bypass such ideas and go straight to attending to the oxygen and the opera music. For me, this angle of ‘what brings you to life’ runs through a number of (often overlapping) definitions and implied understandings of spirituality, within discourses such as nursing, religious studies, theology and devotional/inspirational literature. These could be grouped as follows:

1 Those that emphasise connections and/or relationship in some sense (eg to nature, God or family) – in other words, the impact of one person, group or thing on another.
2 Those that focus on aspects of personal experience (as distinct from the beliefs and ideas that may underlie them or flow from them).
3 Those that major in some way on themes of meaning and purpose (or vision, values and vocations).
4 Those that concentrate on practice, lifestyle or action (as distinct from theory and doctrine).
5 And, clearly, those that mention more than one of the above in equal measure.

Further down the road, I added:

6 Those that recognise the centrality of personal or shared story – narrative, tradition, journey and/or lineage – (which I feel are much less prevalent in discourses of spirituality and spiritual care than the other categories above, but are in fact a common feature of most, if not all, versions of religious spirituality).

…this angle of ‘what brings you to life’ runs through a number of (often overlapping) definitions and implied understandings of spirituality, within discourses such as nursing, religious studies, theology and devotional/inspirational literature

This overarching ‘what brings you to life’ theme first became clear to me when I was chatting with the newly appointed chaplain in our local Mental Health Trust, Emma Louis, in 2004. I had asked her how she typically approached a situation where a patient said that they had had a supernatural experience, or had seen a figure, such as Jesus or an angel. She explained that she tended to go straight to enquiring what kind of impact it had had on the person, rather than addressing the veracity of the claim, which sometimes seemed to be the challenge behind the reporting of the experience. In other words, had it been a comforting and encouraging experience, or was it otherwise? It made me realise how easily I could slip into an approach to spiritual care based on implicit judgments based upon truth and fact, rather than on care and wellbeing. So, the idea of the overarching theme is to accept that patients, clients and fellow practitioners may live by one or more of the types of spirituality listed above, but the deeper question could perhaps be whether or not it is life-giving for them (and others).

Alongside this, I had been refining my understanding of ‘reflective practice’ facilitation – the giving and receiving of which is an occupational competency for healthcare chaplains. I had already been schooled in this way of thinking and working through the Master’s Degree in Pastoral Care and Counselling (Master of Arts in Pastoral Studies) at Birmingham University, under Dr Emmanuel Lartey.1 I have come across many variations of reflective models within nursing, pastoral care, theology, educational theory and management/leadership theory. My own version is in no way claimed to be original. It is an amalgamation of what, from experience and reflection, seem to be necessary and fruitful elements of the process, which I have cherry-picked from various sources. I have used it for my own, self-administered reflections in chaplaincy, parish ministry and counselling. I also draw upon it when I’m undertaking training or facilitating reflective practice groups and as the basis of integration for my own understanding of clinical and pastoral supervision.

The model comprises five stages. The five categories I identified in my attempt to understand definitions of spirituality are reflected in the five stages of the model and can therefore be mapped onto it. But first to the model itself.

How convenient that the first letter of each key word – story, impact, experience, visions, values and vocations and experimental action – give us the acronym SIEVE, a model which seeks to sift out the key ingredients which can help us to reflect-in-action and reflect-on-action.

Curiosity becomes a tool that can be employed at each stage of the SIEVE cycle, and I have developed a tool with which to experiment:

The curiosity spectrum is used to explore the practitioner’s/client’s/supervisee’s relationship to different manifestations of spirituality. Curiosity about curiosity, and lack of such, can be amplified by identifying it along the following spectrum:

The model takes the following structure:

1 We all need to tell our story first, so it makes sense for ‘what happened’ to be the usual starting point.
2 Capturing what impact* this had on the practitioner (and others) comes next: we explore the effect that people and situations figuring in that story have had on us.
3 This leads to how we experience this in terms of our emotions, convictions, embodiment and so on.
4 Then we can try to tease out ‘what matters most’ to those involved, including those of us standing back and reflecting now. This stage involves analysing what might be the meaning and purpose – the visions, values and vocations – driving and/or helping to make sense of the story, impact and experience. This might also lead to further engagement.
5 In light of all this, we go into the ‘what next’ stage – that of ‘experimental action’ (not solution). The word experimental is used, not because ‘e’ is conveniently the last letter of SIEVE, but because we recognise the dynamic, socially constructed and provisional nature of the knowledge and plans produced here, reflecting the epistemological implications of reflective practice.
What I find exciting about it is that, if we wish to make spirituality more explicit in our practice, and therefore in our reflection-in-and-on-practice, we can choose to recognise and explore different types of spirituality (and spiritual needs and resources) within the different steps of the model, as listed in the definitions of spirituality I shared at the start of the article.

For some, there may still be the question: ‘Yes, but how do I actually get into these themes in the midst of practice or in the midst of reflection on that practice?’ In this respect, I have been aided by the following three sources:

a) The relational needs identified in Richard Erskine’s integrative psychotherapy.3 Among others, he claims that we all sometimes need the other in a relationship (psychotherapeutic or otherwise) to initiate. So, in a relationally centred approach, the practitioner might initiate an explicit opening (via interest or concern) into an aspect of the other’s spirituality, which they may have implicitly or explicitly mentioned.

b) Joyce and Sills, in their introduction to Skills in Gestalt Counselling and Psychotherapy, advocate ‘active curiosity’, which they state they believe to be ‘…an essential part of the role of the counsellor in Gestalt who is attempting to understand the world of the client.’4 They quote Erving Polster’s statement that ‘…one of the primary requirements of doing therapy is to be able to be fascinated with the patient.4

In an illustration, they use the following intervention by the therapist: ‘I have noticed that you have been tapping your foot all the time you were speaking, and I‘m wondering if that indicates some restlessness or tension.’4 So, although I am unlikely to verbalise it so bluntly, my attitude during and after practice might be: I am curious about your spirituality, and/or I am curious about my curiosity/lack of curiosity in your spirituality.

c) Paterson and Leach advocate ‘noticing’ and ‘wondering’ as core elements of supervisory practice.5 I found myself wondering about ‘wondering’ after being inspired by Maureen Slattery-Marsh, our Divisional Chair, and her reflections on ‘Living our laments in the tears and tears of life: integrating a spirituality of solidarity into therapeutic practice’ in her contribution to the 2021 Working with Soul Conference. I realised that exploiting the different meanings/uses of the word ‘wonder’ could address what I felt to be a weakness of the SIEVE model. It can be seen as favouring and reinforcing a ‘left-brain’ mentality, lacking space and encouragement for so-called right-brain activities, such as imagination, fun, art, creativity, synergy, serendipity, holism and non-linear thinking. These could all be seen as features of spirituality over theology and its atheistic equivalents.

* I would like to thank my former colleague, Mark Stobert, one time Lead Chaplain at Dudley Hospitals and Cambridge University Hospitals, and former Chair of the UK Board of Healthcare Chaplaincy, for his emphasis on the word ‘impact’, which rightly captures more of the dynamic sense of what ‘relationship’ and ‘connection’ actually entail.

I invite you to explore bringing right-brain thinking to the concept of ‘wonder’, so that it can be used as another ‘tool for curiosity’.

It is possible to use the word ‘wonder’ in the following three ways. As you progress from the first to the third, allow vistas of curiosity to open up and reveal more possibilities:

In this final transition, there can be a ‘coming to life’ or ‘feeling alive’, as experienced in certain combinations of ingredients, as is the case with chemicals, musical notes or personalities. What should pastoral care look like in the 21st century?

In the first in our new debate series, Paul Hurst argues the case for a new Universal Pastoral Care model, centred around the principles of counselling ethics rather than faith-based considerations. Thresholds, October 2020

Reclaiming the spiritual in reflective practice groups for clergy 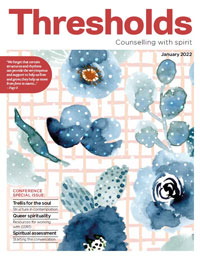